Impressions from Section 323 on a Wild, Victorious Night

With an on-campus attendance record of 35,446, not all seats are guaranteed to be good ones. So I ventured to the highest points of the Carrier Dome to see why fans passed over the HD experience for a distant view of Syracuse's 91-89 win over Duke.

Share All sharing options for: Impressions from Section 323 on a Wild, Victorious Night

I thought they were crazy.  Insane.  Ridiculous.

It's the biggest game of the year.  And here they were, gathering about 60 yards away from Jim Boeheim Court, passing around binoculars like salt and pepper shakers at the dinner table.  What logical person would do this, rather than watch from a warm home in front of a flat screen TV?

Naturally, I wanted to be one of them.  To see why they showed up, how they felt and what they could see.  My first encounter was in the last row of section 334.  I met Michael Abbott, who had this view: 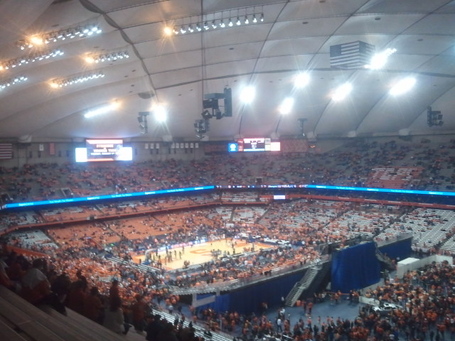 Abbott was there with his college roommate, Steve Dole, who came all the way from Atlanta.  They've been making the trek to the Carrier Dome periodically since graduating from Syracuse about 20 years ago.

This season, Abbott had no doubt which game he would come to.

"It will be more electric than it has ever been," he predicted.  "People have been anticipating the start of a potentially new rivalry. It’s the game we circled on Day One. We choose one game to go to and this is the game we chose to go to. We bought our tickets and booked our hotel a LONG time ago."

For Abbott and Dole, the Carrier Dome serves just as much as a sports arena as a center for reunion.  There's a certain level of camaraderie involved.  Spending time in the same building you did 20 years ago with the same people you lived with tends to do that to you.  It instantaneously transforms you to another era.  Dole fondly recalled his favorite Carrier Dome memory, watching John Thompson's ejection in the 1990 OT thriller against Georgetown.  That game also set the record for the largest on-campus crowd.  Dole watched from the first row of the student section.

I began to get it.  You have to be in the building.  Fans don't have longtime memories of games they watched from the couch.

There was only one catch.  Abbott and Dole didn't have nosebleed tickets.  Their seats were in Section 124.  They had ventured to the top of the Carrier Dome for a temporary stay to see what it looked like.  Essentially, they were doing the same thing I was.

So I trudged around the end zone to section 324.  As I walked in, the security guard stopped the man in front of me to verify that he belonged in this section.  "Why would I fake these tickets," the man replied with a grin. 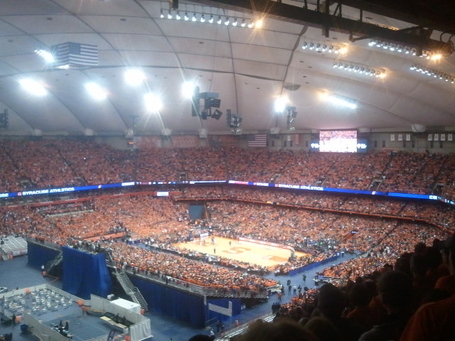 (Section 324, shortly before the game)

In the top row, I met Brian McKain, who graduated from SU in 1992.  He was sitting just under the Jim Brown flag in the far end zone.

McKain sat with his young son, both in awe of the magnitude of the arena and the attendance.  Like many fans, McKain came not only to watch a basketball game, but to be part of the spectacle of a historic event like this one.

A few rows over, Chuck Fought had the same mentality.  He came all the way from Charlotte for the camaraderie, the atmosphere and the live action.  Not once did he mention that he was there to see the No. 2 team and No. 17 face off.  Most of the people I talked to were the same way.  That's the reason the location of the seat didn't matter. We all just want to be a part of something bigger than ourselves.  It's why we change the South Campus buses to say "Beat Duke".  It's why we buy all of the silly t-shirts.  It's why sometimes we camp outside in January for nearly two weeks.

Around 6:15 p.m., I hunkered down at the top row of Section 323.  There happened to be an empty seat, No. 110.  Around me, the beer was flowing and the people were dancing.  When Rakeem Christmas made the first field goal, they didn't sit down.  There were a few requests in the second half to start up the wave.  (Okay, I never said it was perfect).  I even managed to find a strange drawing, resembling the Duke Blue Devil himself.  No, really... 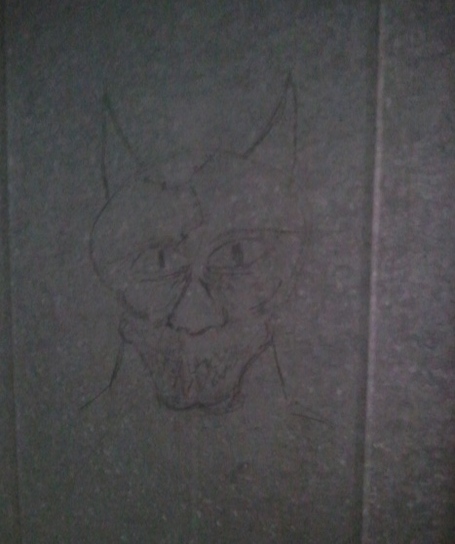 In the postgame press conference, Jim Boeheim said it best: "If you sold your tickets for this game, you should be ashamed because you made some money and missed an epic."

As I walked out of my cove in Section 323 and into the concourse, a gathering of orange-clad strangers joined in on a booming "Let's Go Orange" chant.  The same chant I heard as I exited my first game in the Carrier Dome as a Syracuse student  -- when the Orange took down Wake Forest in 2011, also in overtime.

This long-anticipated game somehow managed to not only meet its lofty expectations, but exceed them.

"What’s been amazing is to see the community, students, ESPN and everybody live up to the excitement," Abbott said.

The Dome had the same effect of bringing back fond memories, whether it was mine from two years ago or Abbott's from two decades ago.

As my brethren of Section 323 walked out into the night, we had the same thing as the people sitting courtside -- a new memory.  One that won't soon fade away.

And as a sports fan, that's all you can really ask for.