It's been sadly accepted for years, but the time is right to stop complaining and start figuring out ways to improve officiating at the division one level.

Share All sharing options for: SU Basketball: Officially Time For Some Changes

This is not an excuse, but it probably could be.

In reality, your favorite team probably lost because it didn't play well enough to win not because the officials had it out for you and your team.

The same goes for Syracuse, which obviously hasn't lost, but the reason the Orange has needed miracles against Duke, Pittsburgh or even N.C. State isn't because of inept officiating. Bad calls didn't help, but the Orange has some areas needing some attention.

Now, before we go further, let me make clear, I do not envy any official in any sport at any level. It's forever the least desirable position on any court or field, and yet, it's the most invaluable, too. Without refs, there isn't a game -- period. So, while I'm going to take college hoops officials to task, understand that I'm only here to help and that I'm not doing this out of hatred.

Actually, this is probably where you are asking yourself, Why is he bringing up the state of officiating again? It's always called into question, and Syracuse is still undefeated, why now?

...officials are still screwing up far too often!

I snapped that picture during overtime of Connecticut's win over Memphis on Saturday. You can see the time remaining, that was in overtime, by the way, as the Huskies clung to a one-point lead. Missed the game? You probably think Connecticut's Lasan Kromah is a good two feet out of bounds, which should have given the Tigers the ball back, a chance to run a set and possibly retake the lead.

Here, get a closer look at the picture for yourself (yes, I know it's grainy). 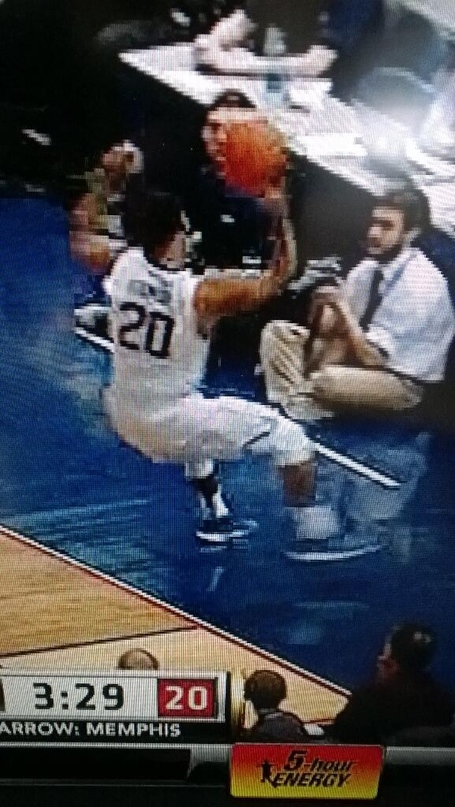 But you know what happened? Kromah, flatfooted on the blue, tipped the ball back out to a teammate and about twenty seconds later Ryan Boatright drilled a dagger 3-pointer, game over. The officials couldn't have missed a bigger moment in the game -- a blown call all but ending what was one of the better contests of the season.

And the problem is, that wasn't the only bad call in a big game this past weekend. Officials and timekeepers couldn't get on the same page in Duke's heart-stopping win against Maryland. Did that error contribute to the Blue Devils win? It's hard to say, but the fact it's even a question is a problem. And let's not forget about Arizona, which suffered a ridiculously tough loss at Arizona State. The Wildcats should have been awarded two free throws and the ball after the Sun Devils' Jahii Carson not only hung on the rim after a massive dunk, the dude did chin ups on it in the closing seconds of the game. Somehow, the officials didn't make the call and now ASU is firmly on the bubble and Arizona has lost two of its last four games.

It's so bad across the board right now that Karl Hess, the longtime official pictured above, even has multiple hashtags on Twitter. You can search either "#KingKarl" or "#WhereintheworldisKarlHess" to find out exactly where Hess is bringing his talents for that particular day. Just scroll down those pages, Karl Hess is probably on some Kim Kardashian level here.

The state of officiating, everyone!

Remember Trevor Cooney's being called for a charge at Pittsburgh when he was tripped by a defender? Really, Pitt and SU fans both have reason to be upset with the officiating from that game last Wednesday. Without question, the spotlight at the Pete was too bright for that crew.

An all too common occurrence across the world of college hoops -- big games, bigger blunders.

I'm sick of it, you're sick of it, we're all sick of it. And when every someone says they're sick of something, my reply is usually, Find a solution or simply learn to live with it. So, let's listen to...me...and do something about officials in college basketball.

Let's clean up the game with the following changes:

And, really, when you think of all that is on the line, game in and game out, why wouldn't the NCAA want to make sure its officials are in the best shape, mentally and physically? I get that it's the exact same situation officials in other sports are fighting, but it's hard to believe that the NCAA would allow for such dysfunction. In college hoops the players come and go, but, generally, the coaches and the refs remain the same -- but it's the officials who are disposable, evidently.

That needs to change. And it would if officials were considered full-time employees with set work schedules. You think an official has ever missed something because he or she is thinking about catching the next flight out for tomorrow's game? That's a paycheck we're talking about, I'm absolutely certain that's happened, either consciously or subconsciously. This isn't a game, something dismissive and ultimately forgettable, college basketball is a big time business and officials are trying to get their just due like everyone else in this world.

So would my proposed changes guarantee an official won't mistakenly consider a player two feet out of play as actually saving the ball? Is this a full-proof plan? Likely not, as to err is human and officials are clearly human and mistakes will always be a part of everything.

Yet, I'd like to think these changes would probably cut back on those errors, which is progress. And all the changes, over time, would lead to a better game on the floor -- which should always be the goal. Of course, there will always be questionable calls, you can't please both teams when one side is being penalized. But these improvements would help lead to a product where, when the final buzzer sounds, there would be a winner and a loser with far fewer excuses.