The New York Times released a cool graphic this morning that is sure to get SUNJ fans all up in arms and citing OTHER studies.

The New York Times' Upshot section has created some cool maps about baseball and basketball fandom in the past, based on Facebook likes and users' zip codes. Today, however, they tackled a much larger undertaking: mapping college football fans across the country. 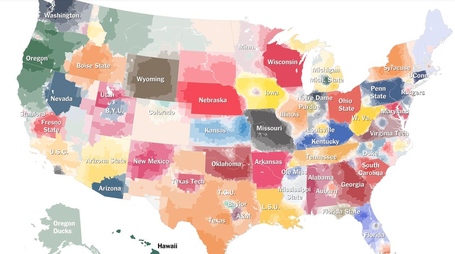 There's a lot of great things to look at in the post, and I'd highly recommend reading through the whole thing to get full explanations on the odd Oregon takeover of NorCal, the Longhorns' dominance over their state and Chicago's tapestry of different fan pockets. But what we're obviously going to talk about most of all is that LARGE swath of Orange in the Northeast corner there.

To Orange (HOW/WHY?!?!), Rockland, Putnam, Bronx, Nassau and Suffolk Counties, you're all #disloyal idiots, though at least Syracuse is still top three in ever one of those.

We haven't touched on the area you're probably most concerned about, however: Manhattan County. New York County, a.k.a. Manhattan. (Ed note: original post was incorrect due to living on the West Coast for too long)

On the map, Manhattan is listed out by zip codes, with no team really establishing any notable dominance other than Notre Dame, Michigan, Penn State and Ohio State popping up a ton, along with Florida (?!) and Syracuse.

On the map, you can find Manhattan as a slight win for Syracuse, over the likes of Notre Dame, Ohio State, Penn State, Florida (wut?) and Michigan, who also litter that county and its surrounding areas. It may seem like nothing -- and 7.6 percent really isn't much -- but MARKETING AND #BRAND confirmed, apparently!

The one name absent in New York County? You guessed it: the State University of New Jersey...

Coupled with winning both Brooklyn (Kings County) and Queens, plus a top-three finish in the Bronx and at least showing up on Staten Island (basically Jersey, and STILL a no-show for the Scarlet Knights), I think it's safe to say that DOCTOR Gross is having himself a very pleasant morning. "New York's College Team" is a fair assessment of the Orange, even if it applies to the state more so than the city. But hey, at least we're on the map (hi, SUNJ!). and that goes for both the State and City, apparently. I guess those cab signs and Yankee Stadium signage have worked out pretty well, no?