As he does every week, Syracuse coach Scott Shafer hopped on the ACC Coaches Teleconference to chat about all things Orange football -- from the previous week's results to off-the-field matters, and of course, the upcoming game. Today, that "next game" is Louisville, and Coach Shafer managed to offer up plenty of thoughts about the Cardinals.

When asked about Syracuse's upset over Louisville at the Carrier Dome (forever know as the "Cardboard Nassib Game"):

"Well, you know, it was a long time ago, but obviously it was a good victory for us. Kids played hard, well. Offensively Ryan Nassib played well, and just a great victory, great victory in the Dome and that sort of thing. From a coach's perspective that was a long time ago and a lot different situation that we're confronted with right now. Right now we're just kind of focused in on finding a way to move the ball against one of the best defenses in the country, and looking forward to that challenge, and then a great mind in Coach Petrino on offense. We've got a great challenge in front of us here as we get back home in the Dome."

"Well, I think it starts, they have a very good football coach in Todd Grantham over there. I've always admired his work throughout the years. I don't really know him personally, but he's a very good football coach, and he's got some very good players. They were a very good defense last year, as well, as you know. They've got great playmakers. That safety (Gerod) Holliman, I remember him in high school, and he's a great player. Six interceptions already this year. And there's a reason why you take those kids that can run and hit and put them in a great coordinator like Coach Grantham, that's why they're No. 1 in the country in rush defense, No. 3 total defense, and just all over the place with all the other categories in the top 10, top 12. So that's where the first challenge starts"

"And then you flip it to the other side of the ball, and Coach Petrino, he's one of the better offensive minds in college football. He really knows how to keep you off balance. He breaks his tendencies week to week, changes up formations on you and personnel groupings, keeps you out of being able to match personnel at times on 3rd down. Those are just a handful of the things, and then you couple those two great coaches with great talent, and you've got a definite challenge in front of you."

On freshman QB Reggie Bonnafon starting the game for the Cardinals, and how SU is preparing for him instead of Will Gardner:

"Well, they're both young men that have quality reps underneath their belt, and they both have good skill sets. I don't think it'll be a change agent in what Coach Petrino does. He's going to do what he does, and obviously he's been very successful at that. You know, different than maybe if you had a guy that was running option with one guy and drop-back with the other. I don't see it as being two different game plans the way I see it. I think both those kids are very capable, and we need to be ready to defend the offense and whichever quarterback is in the game."

On how the Orange run game is going to be able to attack Louisville's top-ranked run defense:

"Well, I think Coach Grantham does a great job presenting different looks for the offense to attack, and then that scheme is backed up with very good football players. Coach Strong did a great job stockpiling some very talented defensive players on that side of the ball there, and when you take a smart defensive coordinator and couple it with great athletes, you see that No. 1 rush defense in the country, so it'll be a great challenge for us, and we look forward to it."

Yes, coach started four of those five responses with the word "well." But that's part of his charm. Still, probably lends itself to a #BRANDING slogan... 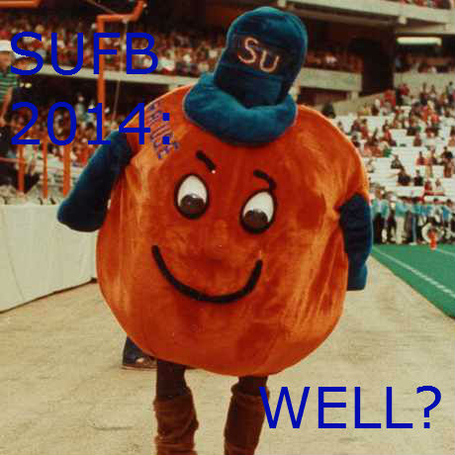