What the P-S Won't Tell You About Louisville

While our fans fret over bubble screens and uniform colors, HCSMFS and The Orange face the second of three top ranked opponents at The Dome. This week, it is the darlings of the ACC, The Louisville Cardinals!

Share All sharing options for: What the P-S Won't Tell You About Louisville 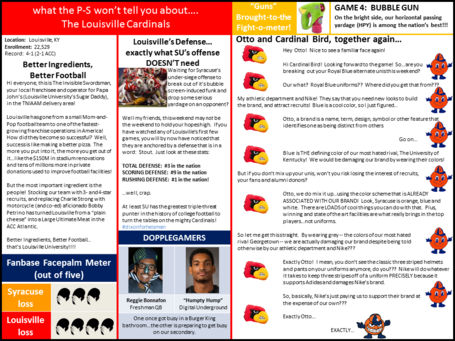 Can you feel the barometric pressure rising in Syracuse?

Another loss to another high-profile team inside a Met Life Stadium filled with another team's fans.  It's the same old story, and one that has many of us feeling a tad frustrated.  Sure, it shouldn't come as a major shock that Syracuse lost to a top ten opponent and currently sits at a modest 2-2.  Yet the manner in which we have lost (or barely won) -- death by bubble screen, red zone inefficiency, and an over-dependence on the nation's greatest ever punter -- is eroding the confidence of Orange fans at a time in the season when it is needed most.

Louisville and Florida State will enter The Dome eight days apart, and in those eight days, Syracuse will have two chances to spring an upset and put the bandwagon right back on the road.  Win one and we're right back where we thought we'd be.  Lose two as the college football world expects, and we face the uncomfortable reality that this team will need to make a tremendous late-season run just to equal our 2013 season.

Friday is our chance...let's take it!

In this week's preview, we introduce you to the Louisville Cardinals in the style of their greatest benefactor, Papa John!  We offer detail on why Louisville is probably not the best opponent for our struggling offense, and we enjoy a candid conversation about everyone's favorite topic -- branding -- between Otto and his fellow furry friend, Cardinal Bird.