The Director's Cup Standings have been released for fall. Syracuse actually didn't do half bad!

In a release today, the National Associated of Collegiate Directors of Athletics (NACDA) announced the final fall standings for the Director's Cup. We knew we'd start caring about these a little bit more in the ACC, and with DOCTOR Daryl Gross doing wonders for our non-revenue sports during his tenure, we've been set up well to compete with our new conference peers. Syracuse finished 26th overall this fall -- which is great -- but of course, it doesn't look all that competitive when compared to some of our ACC brethren because...

The ACC Placed Five Teams in the Top 10

But back to matters you actually care about: Syracuse. As mentioned, Syracuse was 26th overall, which ain't too shabby, especially considering our first top-40 finish ever was only this past June. The Orange were buoyed by men's and women's cross country, which racked up a total of 129.5 points between them. The football team grabbed us 45, and women's field hockey snagged another 25. We scored a grand total of zero points for FCS football (obviously), men's and women's soccer, women's volleyball and men's water polo (which we don't even have). Nice job, Orange, considering you didn't even score points in half the sports they track!

As far as ACC programs go, Syracuse was seventh, with Maryland (21st overall) managing to rank in front of them along with those five top-10 schools. But since we don't count the Twerps for anything around here anymore, WE'RE ACTUALLY SIXTH IN THE ACC.

For those that care about these sorts of things, we were sixth among private schools on the list, behind Stanford, Notre Dame, Duke, BYU, USC and.... fucking Georgetown. Moving on...

Screen shot of the top of the standings below, and again, check out this link if you want to see the full table. 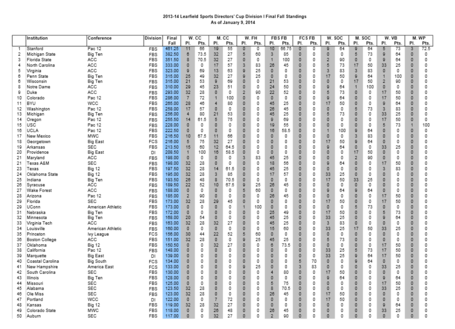