Which 2014 Syracuse Football Three-Game Plan Should You Choose?

Syracuse has a three-game package for the 2014 football season featuring the FSU game available.

Share All sharing options for: Which 2014 Syracuse Football Three-Game Plan Should You Choose?

You might have heard but the Florida St. Seminoles won the National Title last night. It was fun. You probably should have watched it.

You might also know that the Seminoles are coming to the Carrier Dome next season. Such is the gift/price of being in the ACC.

SU Athletics is ready for your interest and they've put together a three-game package to whet your whistle... 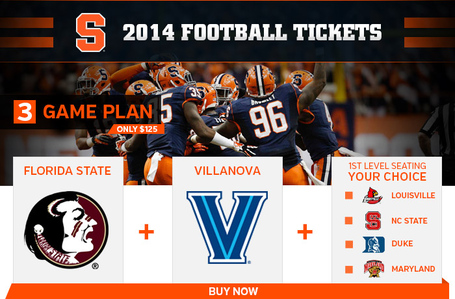 Obviously the trade-off here that if you want the FSU ticket, you gotta suck it up and get the Villanova ticket. But as for that third choice, you've got some solid options. Assuming you go for the package deal, let's break down your options for that third ticket...

#4 N.C. State Wolfpack: The Wolfpack are coming off a 3-9 season (0-8 in ACC). Though I suppose this might be the most likely win of the four-pack, it's probably the least exciting pick as well.

#3 Maryland Terrapins: Maryland is pretty close to the Atlantic coast and Syracuse is pretty close to Big Ten country. Naturally, because college football, Syracuse is now in the ACC and Maryland is now in the B1G. Anyway, this non-conference-again showdown should be competitive with the added bonus of wanting to do the rest of the ACC a favor and beat-down on the Terps one more time.

#2 Louisville Cardinals: Teddy Bridgewater and Charlie Strong are gone but the Cardinals should still be a solid foe. Not to mention, Syracuse vs. Louisville is usually a pretty good game.

#1 Duke Blue Devils: How did we get here again? Somehow, the Blue Devils might be the second-best team to visit the Dome in 2014. If you're simply looking to maximize the value of your ticket package based on quality of team, this is the way to go. They've got a Top 25 recruiting class coming in (again, WTF?) and should once again compete for the ACC Coastal crown (seriously, why did we end up in the Atlantic?)