Goodbye platinum, the Orange will instead don a pretty cool special units against BC on 2/19.

Two years ago, we were introduced to Nike Hyper Elite Platinum uniforms, a.k.a. Those Platinum Ones. Now, the Orange will be donning special Nike uniforms this season, though I have a feeling you're going to like them a bit more this time... 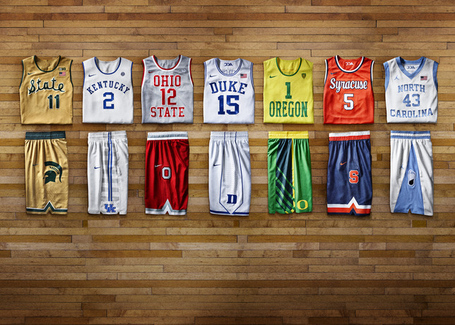 The 2014 Nike Hyper Elite Dominance uniform celebrates the past and present of seven outstanding programs. The distinct jersey and short combination will be worn in select upcoming games.

SU will wear the uniforms when they host the Boston College Eagles on 2/19 in the Dome.

I absolutely love the jersey and I wish we'd use it as our jersey all the time. It's better than our normal uniforms. It's obviously a nod to the early 90's SU look and you won't get too many complaints from Orange fans there.

Of course the big sticking point is whether or not you're cool with the blue shorts pairing. I'm guessing there's going to be pushback and, if we adopted this look long-term, I'd much rather see the obvious orange shorts. BUT, in a weird way, I'm willing to go with it for a game.

Maybe I'm just happy to see blue recognized as a school color for once. Plus, you know, it could be worse. It could be gray shorts.