Well, That's One Way To Get Syracuse Football Some National Exposure

Scott Shafer picked the wrong day to pick on Atlanta.

Share All sharing options for: Well, That's One Way To Get Syracuse Football Some National Exposure

As you might have noticed, there's a lot of snow in the South right now. Well, not a LOT of snow, especially to us Syracuse folk, but enough to cause major traffic jams on the roads, closures at the airports and a whole lot of chaos.

Syracuse Orange football coach Scott Shafer is currently in Atlanta doing some recruiting and his plans seem to have been derailed by the weather and the city's inability to deal with it. So, he took to Twitter to make a playful jab about it. 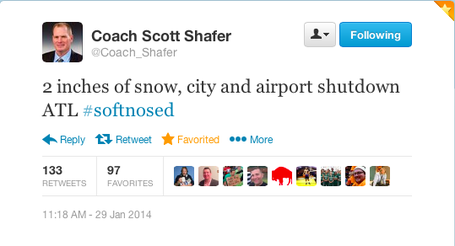 Cute. It's a play on Shafer's catchphrase and a little in-joke for us Syracuse fans, who know that 22 inches of snow would barely cause a delay on the streets near campus. Knowing what we know of Shafer, he obviously didn't have any concerns or mean any harm beyond simply that.

However, Shafer committed a cardinal sin. He made the tweet on a slow college football news day. And when College Football Twitter found out, holy love of God…MAXIMUM FAUX OUTRAGE ALERT!!!

Fixed. Softnosed southerners from FSU, Clemson and Georgia Tech beat Syracuse by a combined 164-17 in 2013. pic.twitter.com/CnRHUmjETb

Actually it's not. That's part of the problem RT @JFowlerCBS Based on responses to Scott Shafer's tweet, the South is awfully salty today.

About 80 ACC players hail from metro Atlanta. Only 4 of them play for Syracuse. @Coach_Shafer is working hard to lower that percentage.

The other major difference between Syracuse and Atlanta is 56 points.

So a coach from Syracuse is in Atlanta trying to recruit players and calls the city soft. Well good luck at next HS he stops by...

@CuseFootball When can we expect an official apology from @Coach_Shafer? Incredibly insensitive to those stranded overnight in their cars.

@Coach_Shafer you're a prick. No wonder your team sucks. Don't come recruit in our city then bash it. Stay out moron!!!!

@Coach_Shafer why were you even in GA? Talented recruits haven't even heard of your program

@Coach_Shafer let's be clear. If u ever scheduled UGA it would be to get your pansy ass team and school a paycheck.

And this was all before Shafer deleted the tweet and then caught a mountain of crap for doing THAT.

Honestly, Syracuse fans, let this one slide. Everyone will have forgotten about this in roughly three hours when they next ball of yarn in thrown in front of Twitter's claws.

And if you honestly think this will have any effect on recruiting, you're insane. "Well, coach, I WAS going to accept your offer to play football and attend a major university for free but because you made fun of Atlanta on Twitter that one time, I'd rather just skip college instead and become a bricklayer."

If anything, I have to admit this whole mini-episode really bummed me out. Being on the brunt of the Great American Daily Faux Outrage Twitter Barrage really drove home the sad stupidity of it all. Shafer is "classless" and "should apologize" and "should be ashamed" of himself. Even fans of Alabama (ALABAMA!) were all worked up giving Shafer the business…why??? You're Alabama, you dummies!

It makes me realize all the times I've done stupid things like this, and all of the dumb times that Syracuse fans have attacked pollsters or Seth Davis or whoever else on Twitter for making a dumb joke or voicing an opinion. We just can't help but take everything personally on the Internet, can we?

The good news, Coach Shafer, is that there's 1.4 billion Chinese people that really don't give a hell about any of this. So that's a good place to start.