SU Basketball: Dome Is A Weird But Fitting Home

There's been a lot of talk about it, but the fact remains: The Carrier Dome is the strange but right home for Orange athletics.

Share All sharing options for: SU Basketball: Dome Is A Weird But Fitting Home

Trapped somewhere between football stadium and basketball arena is where you'll find the Carrier Dome.

The bubble on Syracuse University's campus is to athletic facilities as is a talented six-foot-eight or six-foot-nine player without a jumper to an NBA scout. A football house known for its basketball playing tenants, and, just the same, a canyon when anything less than 30,000 or so hoops fans have their butts in the seats.

This somewhere-in-between was all I kept thinking about as I sat in the Dome watching Syracuse and Pittsburgh slugging each other mercilessly for just over two hours Saturday. 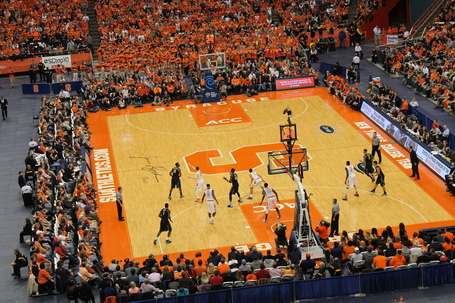 That's because of the possible new facility that would house, among other entities, SU hoops and basketball has been the talk of the town lately. The end of the Dome, could it really be? And even after rumors were kind of confirmed and then (mostly) put to bed, it seems like the clock is ticking, the last years of the Dome are probably at hand. Not quite time for an eulogy, but time to start making proper arrangements, if you know what I mean.

It's not the death knell because, even before politics put the issue to rest for now, the fact is a new arena in this economy, an arena funded in some part by taxpayers, isn't going to fly. Not right now, not without some type of big fight, anyway. Really, the concept of a shinny new toy for sports fans is probably more election-year wind breezing through Central New York than anything based in reality.

We'll give 'em new arenas and rooftop highways and money for schools and...!!!

In other words: No dice. But the obvious facts do lead to a new-arena conclusion:

Fairly significant issues for any "major" program, but real problems for athletic director Daryl Gross, PHD, who has been relentless in making Syracuse University not just New York's College Team, but a recognizable brand nationwide.

Yet, even with all those "flaws," the fact is, I don't want to see the old girl go. Think of all the moments the place has seen. The improbable upset against Nebraska signaling the berth of the Dick MacPherson era, Pearl Washington's halfcourt buzzer beater against Boston College, Chris Gedney's getting tackled at the 3-yard line against Miami, John Thompson Jr ringing up three technical fouls on his way to getting a WWE-style ejection, the rebirth of Syracuse football, and the countless milestones for Jim Boeheim coached teams. A small sampling that didn't even include any lacrosse highlights!

But this football stadium with a basketball court fit snugly inside, or maybe better, this basketball arena with a football field overlapping is forever something of an oddity. A once beloved strange marvel...now dated. And like Archbold Stadium, a place once considered the Eighth Wonder of the World by some people, the Dome will eventually have to go. (Have you seen this, by the way? Watch it and thank me later.)

The new spot will have it all, too. Centralized parking (imagine that!?), actual seating that isn't a slab of metal, and it will look modern and inviting and...like every other arena in the country.

That's what I keep coming back to. The place we have here is somewhere in between other faculties, and because of that it's unlike any other facility. It's synonymous with Central New York not just Syracuse University or its athletics -- hell, it was actually a part of some of the school's old TV graphics!

The Dome is that tall and athletic non-shooter who finds a niche at the next level. A little different than typical, though Syracuse has always felt a little different, right?

Of course, planning for the future is justifiable. It won't happen this year, not next, but probably in the next four or five years officials will break ground on BRAND X Arena. A run-of-the-mill brilliantly beautiful new place. I do have my reservations that it will be a combination facility, retractable roof and all. I think the community isn't really ready to hear how much something like that would actually cost -- real dollars and cents for investors and taxpayers.

It all comes across as more "elect me and you'll see" promises, putting in a building that would not only be big enough to include basketball but also hockey and lacrosse and football. All underneath a roof that can be moved with a push of a few buttons? Let me guess, the next "rumor" will also include Syracuse University bringing back baseball so it too can play in the new stadium/arena.

Sure, something will be done, and the Dome will be put out to pasture sometime, but the whole process should be rather interesting. So many questions to be answered.

What will it all look like? Where will it be? How will it house all the sports yet keep it a financially feasible project? And most importantly, will it be as quirky and perfect and flawed and home as the Dome has been for all these years?