Everyone is keeping their options open for the new Syracuse arena that isn't happening but might one day but no one can say for sure.

Share All sharing options for: New Syracuse Arena: Not Now But Not Never But Not Right Now But Not Saying Never

About the only thing that's moved as quickly as updates regarding the potential new sports arena in Syracuse was SU's move to the ACC. The latter seemed to go from zero to Greensboro in three days. This arena stuff is going to drag out a little longer, but, just a week into it, we've already gone from "probably gonna happen" to "never gonna happen" to "might still happen" to "could happen but not for a while so, chill."

So where we at? Well, Syracuse Mayor Stephanie Minor hasn't close the door on the idea, as many have assumed. She's still willing to listen but until she gets answers to her questions, ain't nothing gonna happen.

"At this point, the questions are still out there to be answered,'' he said. "Nothing new to report.''

Apparently, those questions will be answered. Someday. Probably. That's the sentiment Onondaga County Exec Joanie Mahoney wants you to know.

"It's not never," Mahoney said. "We'll have another shot down the road."

"If it's a good project," Mahoney said, "we can make another pitch."

i.e. if the next mayor of Syracuse is interested, Mahoney's got the plan ready.

Finally, curious discovery by The Dot Com today as they found some secret plans for a new Syracuse stadium made two years ago.

A company that is working to develop the state-owned Kennedy Square property in Syracuse mapped out a plan more than two years ago to locate a new Syracuse University sports arena next to Kennedy Square at the junction of Erie Boulevard East and University Avenue.

The 2011 drawing shows a three blocks-long stadium adjacent to the state-owned former public housing project site, sprawled across several parcels including a city-owned park and some private properties. The pictured stadium is bounded by University and Walnut avenues, East Fayette Street and Erie Boulevard.

That's the same spot as the recent proposal. First glance? Where the hell is everyone gonna park? That ain't gonna cut it... 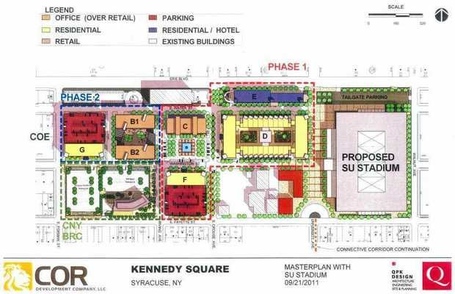 According to the article, DOC Gross was well aware of the plans when he saw them in June 2013.

And so it goes. Where it all ends, no one knows.