Will it be defensive star Jay Bromley or offensive anchor Macky MacPherson?

As the Syracuse Orange Football Awards (SOFAs) come to a close, it's time to announce who the very best greatest awesomest senior was on the 2013 Syracuse Orange football team.

I thought it should be Macky MacPherson.

It really needs to be said that everyone thought Macky was recruited as a courtesy. Even if he was good in high school, very few people expected him to become a solid three-year starter and anchor of the offensive line. Plus, he ended up growing some killer Wolverine-like chops. Double bonus.

John thought it should be Jay Bromley.

Smith's a compelling choice here, but Bromley's the glue that held this defense together in the early goings of a weird season.

And everyone else seemed to split down those party lines. In the end we put it to a vote and… 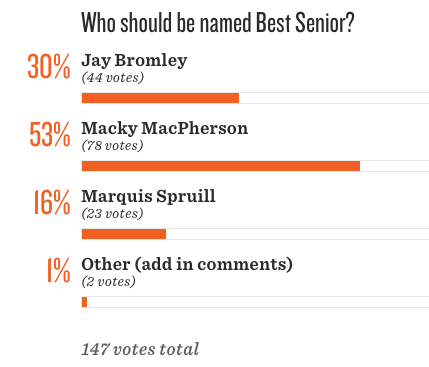 There you go. Congrats Macky, it really is crazy that you ended up being a team captain and anchor. Bring on the next MacPherson...