Maryland and Minnesota were neck and neck until a late (and slightly suspicious) run by Clemson made this race a true nail biter. Who shall we congratulate deride for being the biggest DABO???

At 8pm last night, I surveyed the poll results and comments and started compiling a report to crown the winner of this year's SOFA for Biggest DABO. Throughout the day, Minnesota and Maryland were literally neck and neck in the voting with Clemson a distant third. With such a tight race, I went to the commentariat to see which one of you channeled your inner Atticus Finch and offered the most eloquent defense of your DABO of choice.

To me being a DABO is all about ignorance and lack of willingness to be less ignorant.

Clemson and its fans had every reason to believe they would paste us, but some of the fans we interacted with still took the time to find out a little context about our team. They were generally humorless and at times arrogant, but I don’t think they were the most ignorant while voicing their opinions.

Testudo Times definitely deserve a mention, but part of me thinks they were just so bitter and jaded about how a promising season had turned that they simply shut off their brains. Not a good excuse, but I think it’s enough to keep them from the top spot.

The Daily Gopher really blew me away with so many insisting the NW and PSU games were the only thing that mattered. For a big game (it might not be a big bowl game, but it’s still a meaningful game for the teams involved) with plenty time for research, reading, and film study you’d think there would be a modicum of interest in the opposing team. But no, not really apparently. NW, PSU, W-L record. Full stop.

There were more egregious DABO’s on the national scale, but in terms of folks who actually had reason to not be ignorant of SU football I think Minnesota fans take the victory. 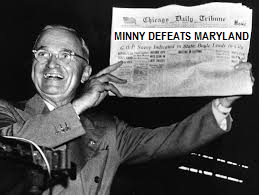 But then, Mike Will is DoubleDown brought us back to the catalysts for the whole DABO thing:

I think we all forget that its not like they were all sweet and nice to use leading up to the game. Everyone keeps mentioning that they were DABO AFTER the game, which is true. But they DABO’d prior to the game as well. To get pasted by 17 in their own stadium andSTILL refer to use as a very very bad team is what DABO is all about. Plus, DABO was CREATED immediately after their ignorant statements. Without TT, I’m not sure if we’d have a DABO category. Gotta give it to the originators. 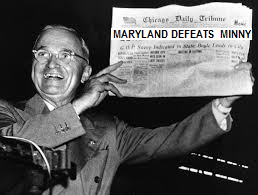 But then, in a matter of a few hours late Thursday night, Clemson goes all: 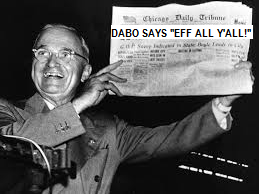 ...and proceeds to come from about 60 votes down on both schools to 60 UP on both schools...it was akin to SU turning a 9 point deficit to an 8 point lead in just over six minutes of basketball. Amazing? Suspicious?? Amazingly suspicious??? I don't know, but damn Clemson...you really want to win badly at everything, don't you? I suppose San Diego news anchor Wes Mantooth said it best for all of us here at TNIAAM:

"I pure, straight hate you...but God damn it do I respect you."

So, we salute you Dabo Swinney, Shakin' The Southland and Clemson for being our 2013 SOFA award winner for Biggest Dabo!

We'll see you in hell Tigers!!!