Tyler Ennis credits the other freshmen with helping the chemistry on this year's team, and Michael Gbinije is glad he's still in the ACC.

After Monday night's win over Boston College, I interviewed some of the Syracuse Orange players. You may be wondering why we're a few days removed from the game and I'm still talking about it. Well, the thing is, I probably won't get to interview these guys again this season, so I decided to take advantage of it.

We talked about the game, but then I talked to a couple players about topics that were completely unrelated. I ended up getting some interesting bits of information that I think you'd appreciate.

I asked Ennis how things are with the other freshmen on the team since he's the one getting significant minutes:

We have a great group of guys where everybody has a great personality, and just coming to practice knowing you're fighting for minutes...but you never see [the other freshmen] pouting or complaining. And I think that's what helps this team be so good, is that everybody kind of knows their role as of now, but also is working to get a bigger one.

In response to a question about whether they're a source of energy when he subs in/out of a game:

Yea, definitely. I've been on teams where people expect to play and they're not, and they're down, but these guys are always up no matter if they're playing one minute or not at all, so I think that definitely helps the chemistry in the team.

I got a laugh out of him when I asked if Ron Patterson shoots every time he gets the ball in practice, like he seems to do in games. I am less technologically savvy than I thought, so you only get a photo instead of the video. Sorry. Regardless, here's his response:

(Laughs) You know, he's actually open a lot. I don't know how he does it, but yea he's always open. [And] he can really shoot the ball. He's shooting a good percentage, actually. 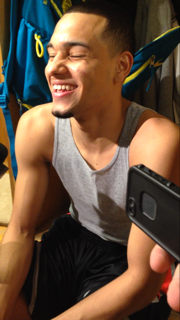 I got to talk to him one-on-one, which was great. He seems a little quiet, but he's really nice. When I asked how he liked being "back" in the ACC, he said:

I like it. I'm starting to recognize players and locker rooms...I feel more relaxed and connected.

Then, I asked why he came to Syracuse after deciding to leave Duke. I knew he talked about it briefly when he first committed, but that was over a year ago. He smiled at first, so I joked that it was probably a question he got all the time. His response was, "Actually, no," which surprised me. On choosing Syracuse, he said:

My family and I talked. I already had a familiarity with Syracuse because Red (Assistant Coach, Adrian Autry) coached me in high school. And I played with a bunch of the guys already [like] Rakeem Christmas in the Jordan Classic.

Autry coached Gbinije when he was on the AAU squad, Team Takeover. The AAU circuit was also how he met Trevor Cooney.

Finally, I wondered whether knowing that Syracuse would be heading to the ACC affected his decision. I thought it may have given him pause, since he would see former teammates. Interestingly, though, conference realignment ended up being "a happy accident," according to Gbinije, who added "I always wanted to play in the ACC, so I was fine with it."

Hm. Imagine that. And there you have it.