Boston College had Syracuse on the ropes until a second half run shifted the momentum in the Orange's favor.

In a game that was closer than the final score indicates, Syracuse overcame a hot-shooting Boston College team to remain undefeated on the season. It wasn't easy, though. Barely four minutes into the second half, Jim Boeheim called time out, just after a BC bucket brought their lead to 8. Conte Forum shook from the Eagles' excitement.

Then, the Orange went on a stunning 23-5 run that made the sold-out Conte Forum shake again. Only this time, the fans clad in orange were the ones making all the noise. When all was said and done, the good guys came away victorious, collecting more #OrangeEagle points in the process.

Here's my report card from the sidelines of tonight's game:

Head of the Class

Trevor Cooney: So, there were three Cooney dunks in four possessions late in the first half. You would have thought you were in the Dome with how the Orange faithful in the stands came to life. He was 61% from the floor, which included going 2-5 from behind the arc. That's 40%, ok? Will everyone relax now? A solid 21 point, 4 rebound, 3 steal effort. The best part, when BC's defense kept him from finding his favorite shooting spots, he was patient and waited. I think we lose sight of how good Cooney's shot selection is sometimes. He knows when he's got it, and pauses when he doesn't.

Jerami Grant: Let's just call him Mr. Momentum. A slightly sluggish first half gave way to the Grant we all know and love in the second. The switch was visible from the sidelines - he stood up straighter, got back on defense faster, and threw down harder. Yea, you know the one. When asked about "the Grant dunk" during the post game press conference, Jim Boeheim responded with rare praise: "That'll be on SportsCenter. That was an, 'ooh!' That was a good one." Grant shot 50% on his way to 16 points, and added 8 rebounds for good measure.

He also added this lovely portrayal of the Baye Keita angry face that we sometimes see during intense moments: 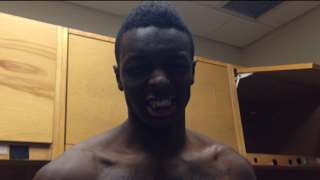 Free throw shooting: Seriously. The Orange were 17-for-21 tonight, good for a Maui-esque 81%.

Tyler Ennis: It was a rough first half, and he actually looked tired. He was out of position a few times on defense, running from one wing almost to the other, and even switching places at the top of the zone with Michael Gbinije. The defense was a mess, and the rest of the Orange looked lost. With 2 fouls and 2 points (on 1-for-4 shooting) heading into the locker room at the end of the first half, it looked like this might be the game that finally got to Syracuse's freshman phenom. Then, the second half started, and he decided enough was enough. On consecutive possessions, both of which went down to the final ticks of the shot clock, Ennis drove for a layup and then nailed a three. Way to keep the defense honest, Tyler. He ended the day with 12 points, 5 assists, 1 turnover, and 6 steals.

I just want to repeat that in case you weren't paying attention: Tyler Ennis had 6 steals in this game.

C.J. Fair: For the average bear, a 12 point, 6 rebound, 3 steal night doesn't look horrible. But Fair's not average. He credited Boston College's defense, but also admitted that he just had an off night.

I wasn't making shots I normally make. They played good defense. They showed a lot of attention when I got the ball, and they made my job hard. I was taking some shots I had confidence in that I knew I could make and they just weren't falling my way.

Rakeem Christmas: We needed him today. He came off of such a great game on Saturday against UNC, I was sure he'd only build on that. Maybe he would have, but "a couple bad fouls" according to Boeheim, and he was done for the night. Argue all you want with the calls, but a veteran player like Christmas shouldn't put himself in that position to begin with. He left the court having 4 points and 1 rebound in 14 minutes of play.

It shouldn't have been this close. Syracuse would have benefitted from some of their veterans playing better. It wasn't just a trademark Syracuse slow start. It was a back-and-forth, physical display that came down to making plays, and the Orange did that. They made plenty of mistakes, too. But in spite of Boston College shooting 50% from the floor, including almost 43% from the 3, Syracuse pushed on. I asked Michael Gbinije how they were able to pull it off, and he said that they "kept grinding" and "continued to battle."

That's exactly what it was - a battle. And it was a battle from the court to the stands. Not gonna lie, I got a little nauseated in the middle of the second half. But the "Let's go Orange!" chants were loud. And frequent. Eagles fans fought back with cheers of their own, disgusted with the Orange audacity. It was a great atmosphere in Conte, though I may not have felt that way had this not been a win.

Now that we've got some perspective, why was this game closer that we're comfortable with? Did Syracuse think it was walking into an easy win and take the game for granted? Did Boston College finally show up? We might not be able to know for sure until we see how the rest of the season ends up. For now, it's clear Syracuse is capable of rallying and coming together as a team, and that's fantastic. At least, it's better than the alternative. What would that look like? A mess of a conference, and a lot of "#goacc."

For a more detailed recap and quippy commentary from the game, click here to check out my Twitter feed.