Jim Boeheim Would Like To Remind You To Shut Up

Jim Boeheim's squad cruised to a fairly easy victory on Saturday as the Syracuse Orange topped the North Carolina Tar Heels, 57-45. After the game Jim Boeheim held his usual press conference where he talked about what went right (rebounding), what went wrong (slow start) and why you shouldn't ever ask him a question about his rotation choices ever.

Boeheim (after a question about Roberson): If I coach here for 50 years can I put in who I want to put in?

Boeheim: I was watching my kid's game yesterday and I wanted the coach to put someone in. He didn't listen to me. Why would I listen to you?

When youy poke the wizard, you risk his wrath... 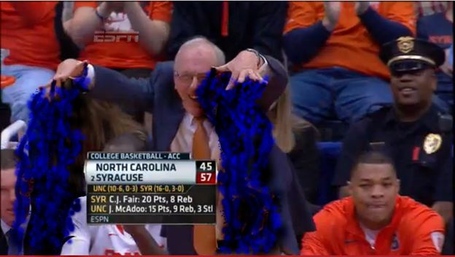