The Quest For Belk, Week 2 Update: How Does Six Outta Ten Sound?

The Orange are 0-2 and the Quest-O-Meter has dipped low, but there's still plenty of time to achieve our Quest.

Share All sharing options for: The Quest For Belk, Week 2 Update: How Does Six Outta Ten Sound?

There are a couple ways to feel about the 0-2 start that the Syracuse Orange have in 2013. You can be angry because you expected (for some insane reason) the team to be 2-0. You can be bothered because you really, really thought they'd be 1-1 and they don't really look like the kind of team that'll even hit the base consideration of a four-win season right now. Or you can remember that you assumed they'd probably be 0-2 headed into this week and pin your hopes on the team righting the ship over the next two games.

You gotta feel how you feel, you know? Feel it out. In the meantime, here's the Quest-O-Meter courtesy of Tom C.: 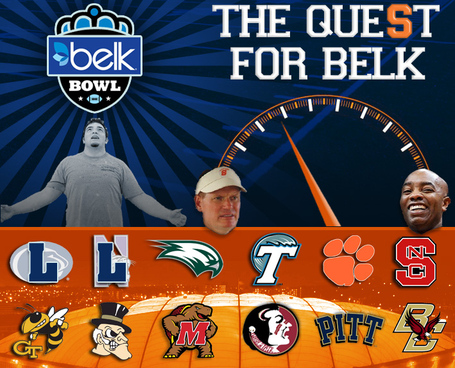 The QOM hasn't dropped drastically since the Northwestern loss was assumed and the Penn St. loss isn't the end of the world. In theory, we should come out of the first four games 2-2 (if we don't, we riot). That should reset the QOM a little bit and get us somewhat back on track for Belk. Needing to win four out of eight sounds a lot better than winning six out of ten. And as Andrew pointed out in MMQB, the play of schools like Wake Forest, Maryland and NC State so far should give you hope that we're not out of bowl contention just yet.