Do We Need To Be Concerned With Northwestern Faking Injuries?

Northwestern was accused of faking injuries late in the Cal game in order to slow down the Bears' offense. Did it really happen or much ado about nothing?

Share All sharing options for: Do We Need To Be Concerned With Northwestern Faking Injuries?

So I didn't watch last week's game between the Northwestern Wildcats and Cal Golden Bears. All I knew was that the Cats won a 44-30 pitchers duel.

Then I came across this piece by California Golden Blogs wondering aloud if Northwestern players were faking injuries to slow down Cal, in essence, making sure Cal couldn't get back in this. There's a video on that page you can watch as player after player seems to get up slowly from a new injury. It gets to the point where Sonny Dykes gets adamant, the crowd openly boos NW every time a player gets hurt and the announcers start discussing the possibility that the fix is in. 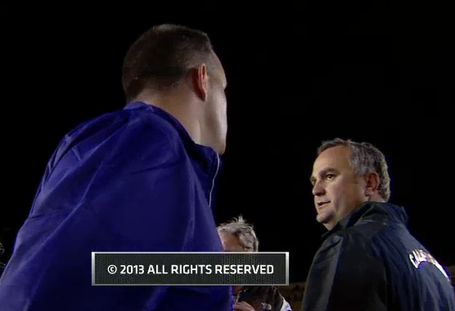 Naturally, Pat Fitzgerald was incensed by the accusation:

"If anybody were to question the integrity of myself, our program or our players, I question theirs."

For their part, our counterparts at Sippin On Purple are pretty sure the team didn't fake injuries but can't say 100%. They do bring up astrobiologists, though, which seems like such a Northwestern thing to do.

While Syracuse tries to run a fast-paced offense, it doesn't exactly compare to Cal's uptempo assault. The Bears ran 99 plays on Saturday to Syracuse's 74.

I'm going to guess this isn't going to be an issue. However, if the game is close late and all of a sudden Northwestern players start grabbing hammies and laying down after every play during a critical Syracuse drive, there will be questions and concerns.