Syracuse's greatest rivalry goes one more round when the Fightin' Byes come to town.

There is no team that the Syracuse Orange have played more in their history than the Bye Week Fightin' Byes. The two teams have played every season since 1908, sometimes multiple times a year. Let's find out if this is the year BWU finally upends the Orange and take home the coveted Golden Pepper Grinder trophy. 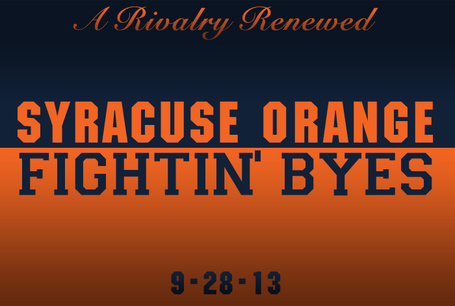 For the second-straight season, the Bye Week Fightin' Byes came into the Carrier Dome and took the Orange to the limit until SU was able to eek out a victory. In what is the longest game in Syracuse and Bye Week history, the Orange survive after ten overtimes for the 84-76 victory.

Unable to determine a winner after ten overtimes, the referees were forced to turn to the extremely-rare penalty kick option to determine the winner of the game. SU won 5-4 on kicks.

School Connections: Former Syracuse head coach Greg Robinson graduated top of his class, Bye Week U '74. He is considered the school's ambassador to the world and honorary Board of Trustees president.

Last Year: The Fightin' Byes put together their best season in a decade behind head coach Mug Darrone. The 0-11-1 finish propelled Darrone to great things, an unpaid assistant position with the D-3 Cortland State field hockey team. DC Scott Schaeffer was elevated to head coach, mostly because he and Darrone were the only actual coaches on staff.

The sophomore has a very similar story to our Terrel Hunt. He was supplanted by a highly-touted transfer (Al Drewlen, via Bye Week A&M). After Drewlin couldn't get it done, Tunt was elevated to the first-string spot. He's held it down in recent 97-0 and 82-3 losses, which might not sound too great but you should see the scores from Week 1 and 2.

BWU also features a power running game capable of ripping off half-of, and even sometimes a full yard, per play. It's led by workhorse Serome Jmith (is it really any weirder than actual player names?).

Serome Jmith (or S-mith, as he's called) is well known amongst fans for his catchphrase, "The barn has hay in it, if I understand how barns work correctly. I'll be honest, I've never been to an actual farm." Very motivating.

Fun Fact: Bye Week wears ACC patches on their jerseys. However, that just stands for their motto: Atleastwelook Coolinour Colors. Greg Robinson came up with it, obviously.