Floyd Little Is An ACC Legend, Which Is Weird, But, I Guess, Still True, Kinda

Share All sharing options for: Floyd Little Is An ACC Legend, Which Is Weird, But, I Guess, Still True, Kinda

I'm finally getting used to the whole ACC thing. The one thing that is going to take a while to figure out, however, is the whole retroactive Syracuse/ACC thing. i.e., like when Floyd Little gets honored as an "ACC Legend."

The Legends will be honored during this year’s Dr Pepper ACC Football Championship Game weekend. They will be honored at the ACC Night of Legends sponsored by the Belk Bowl on Friday, Dec. 6, and on Dec. 7, during ceremonies at Bank of America Stadium for the 9th Annual Dr Pepper ACC Football Championship, which will be nationally televised with either a 7:45 pm (ESPN) or 8 p.m. (ABC) kickoff.

It's awesome that Floyd is getting honored because Floyd is awesome. But...it's still a little weird that the ACC is taking "credit" for what he did forty years ago. Whatever, give the man another trophy and standing ovation. See if we mind. 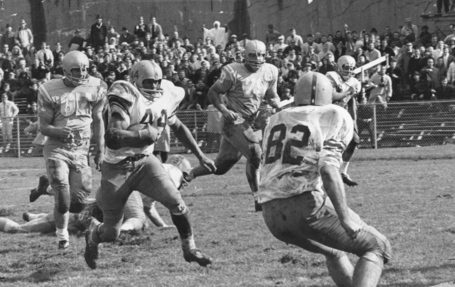