Despite a 19-6 shot advantage, Syracuse's 5th-ranked field hockey squad fails to take their opportunities and drops the first three points of The Orange Eagle to 17th-ranked Boston College 6-3.

Spurred on by a partisan home crowd desperate to see the Eagles jump out in front of the #OrangeEagle standings, BC's field hockey team staged on Friday what many in Chestnut Hill are already calling the "Miracle on Field Turf", by scoring on ALL SIX of their shots and holding off ACC favorite Syracuse 6-3. BC Goalie Leah Settipane channeled her inner Jim Craig to deny wave after wave of Orange attacks, helping BC to nab the first three points of the 2013-2014 Orange Eagle season.

Emma Russell factored in all three of SU's goals, while ACC Player of the Week Leonie Geyer scored once for the Orange, who took their first loss of the new season (6-1). Despite the tough loss, we will not have to wait long to get on the board when our men's soccer team head to Massachusetts to take on the Eagles October 8th.

With one contest down, here are the current Orange Eagle standings: 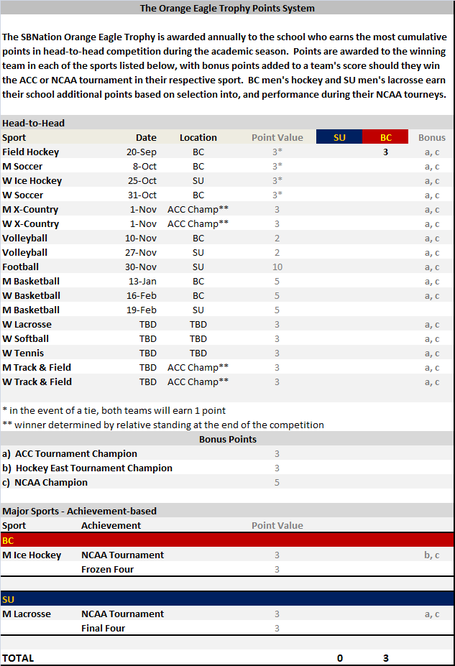 A long way to go Magicians but its a tough one to swallow...The Orange will have an opportunity for revenge should these two field hockey powers lock sticks in the ACC tournament, and we know our ladies won't disappoint!

Look for our next update in early October when our Orange footballers (the other ones) take down the Eagles and even the score!