Let's see if this sticks: I'll be doing a MMQB each week this season with some help from the esteemed Sean Keeley, Dan Lyons, John Cassillo and beat writer Sean Farrell. First order of business: the Scott Shafer Era officially began with a 23-17 loss at the hands of the Nittany Lions. What are we to make of this outcome that we expected yet don't feel comfortable with?

Share All sharing options for: Monday Morning Quarterback: Beginning of an Era

After months of anticipation, he stood on the sidelines just like every other head football coach before him. Donning his already trademarked white visor and a matching white polo, Scott Shafer wore the headset of Syracuse's head coach for the first time. The intensity was apparent every time the camera dared to look his way. It didn't feel any different than an Orange game last year other than the slightly obnoxious white and orange ACC crest on the shoulders of the players.

Shafer's influence was apparent on the defensive side of the ball. Against a Penn State football team more than happy to grind out most of the game in the trenches, the Orange made tackles consistently and efficiently. There was intensity that was not lacking from years past, but rather one that seem to drive the front seven on every snap and blitz.

Thats not say all was perfect or even an improvement over last year. The secondary was bluntly exposed in the second half when Allen Robinson made his season debut. The offense, led by Drew Allen saw it's fair share of struggles.Starting with an opening snap that saw Allen stumble and trip over the ghost of Greg Paulus, Syracuse was unable to gain any rhythm even though the momentum was theirs for the taking on several occasions.

There's lots to work on (as the TNIAAM crew will get to in a moment) but there's no reason to think that anything we saw against the Nittany Lions will be the same by seasons end. Just last season, the offense went through a midseason overhaul for the sake of production. What we know is that Shafer has earned a positive enough reputation off the field to excuse even a woodshed opening week loss. He delivered on his end of team. There will plenty more games that will go under the Scott Shafer era at Syracuse. This one game won't define it and probably won't be remembered should HDSS last more than a few seasons. On to the next one.

Dan Lyons:Trying to stay optimistic about things, while it sucks to lose a very winnable game by six point due largely to an anemic offense, I'm not going to get too crazy about dropping this one to Penn State.

I wasn't a huge fan of what we showed on offense for a number of reasons, mostly because I thought the play calling was fairly uninspired and I'm not sure that such a pistol-heavy scheme is really the best thing to showcase the power running game that defined Syracuse during the 6-1 finish last season, but I'm willing to let the coaching staff use the next three games to get the kinks out and find what works. Remember, last year Doug Marrone was in his fourth year at Syracuse and had a three-year starter, and he and Nate Hackett reinvented the whole offense a week before the season opener, and then more or less shifted the focus towards the run game halfway through. Adjustments aren't impossible to make mid-season, by any means. Drew Allen cited communication issues, and while it doesn't sound good, it shouldn't be that shocking in retrospect considering he's only been on campus for a month, and George McDonald pretty much built this offense up from the ground. It was not a good performance by any means, and I'm not trying to be an apologist, but let's give it more than one game in a giant, mostly hostile, stadium before we start calling for heads to roll.

Defensively, I was more or less thrilled. The squad gave up two huge big plays, but that's always been the weakness in Shafer's defense - he leaves corners on an island, he sends waves of blitzers and tons of different looks at defenses, and the team is always aggressive. With an average offensive performance - say, a decent game from last year's team, Syracuse defense probably leads the team to a two touchdown win with all of the plays that it made. Instead, we get a six point loss, but I was incredibly encouraged by what I saw from that side of the ball, and I am incredibly excited for what this defense is going to do this season.

War Room: The Downside of Being Hardnosed

We are accustomed to aggressive defense and Scott Shafer being together like peanut butter and jelly. Things just work better that way. For the most part, Shafer's defense was excellent, however breakdowns in the secondary gave Penn State the victory. Why? The first TD of the game perfectly illustrates the main issue the Orange's secondary faces. 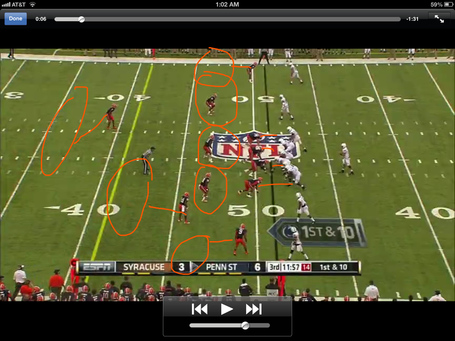 Here we see that the defense is set to run a zone pass defense play. Great job to pick up that PSU would be airing it out and force the freshman to make a read. There's not going to be a lot of options if Christian Hackenberg wants to go short. However, the over aggressiveness of the secondary (part due to defensive coaching, part to compensate for not necessarily being able to consistently win 1-on-1 matchups) will allow PSU to score their big TD. 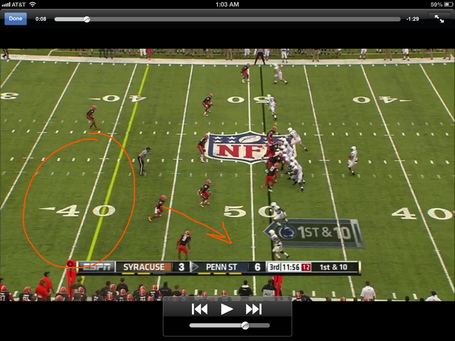 Here's where the problems start. Jeremi Wilkes, possibly by assignment, possibly by instinct, comes in upon the snap. This leaves a huge amount of area for Hackenberg to air it out deep down the Cuse sidelines. Based upon the safety's backpedaling right down the hashmarks and not moving towards the center of of the field, Wilkes is supposed to move back and help form a cover two up top. Hackenberg sees this and reacts. 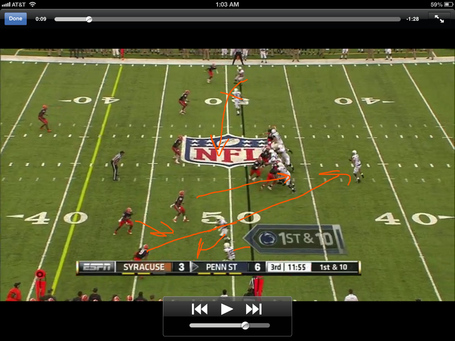 Wilkes' commitment to the sidelines near the line of scrimmage appears to pay off. It looks as if PSU is setting up a quick curl screen play. This is right in line with the conservative play calling to date and is a decent call on first down around midfield. Notice how Ri'Shard Anderson and the outside linebacker aren't even watching the receivers. They are keyed in on Hackenberg's eyes. 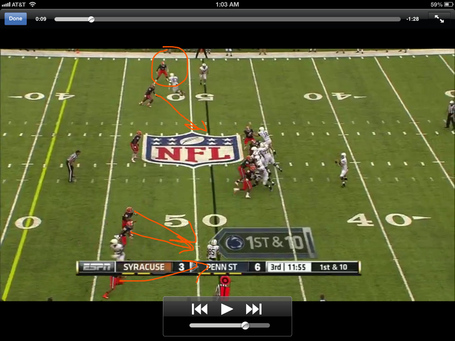 There's the sell. A little pump fake/fake look draws all three defenders on the near sideline to the curl hook screen. On the far sideline, both defenders flinch/freeze for just a second. Notice how both PSU receivers perfectly time their runs like soccer players to burst through at the fake and gain all the separation they'll need. Hackenberg, already knowing that Allen Robinson has the empty grass, airs it out, TD.

All in all, it's a mistake made in week one. It's frustrating because I can guarantee this will not be the first time an opponent is able to scoring on this kind of play. The secondary plays zones and plays them aggressively to make up for mismatches. The only way this play doesn't happen (aside from Wilkes playing back) is the front four somehow pressuring the quarterback.

Around the ACC: Here's where we recap all of the conference action from the past week, led by the esteemed John Cassillo. Once conference play is in full swing (end of September) there will be a full standings update added with the scoreboard.

JC: The week's ACC action was highlighted by Clemson's huge win over Georgia, which appropriately ended with an "A-C-C!" chant by the Tiger faithful. In beating the no. 5-ranked Bulldogs 38-35, Clemson became the first team to ever beat two top-10 SEC teams in back-to-back contests (they beat LSU in last year's Chick-fil-a Bowl). It's just the first game, so we can't necessarily call it a league turning point yet, but nonetheless still a very nice tone-setter for the conference in 2013.

Elsewhere, everything else seemed to happen as planned for the ACC. Georgia Tech, Duke, Maryland, NC State, Wake Forest and Miami all won in routs, while Boston College and Virginia also picked up victories. To this point, Syracuse, Virginia Tech and North Carolina are the only league schools with losses on their resume, and it's worth watching how all three respond going forward. Things aren't getting away from any of them just yet -- they were all heavy underdogs in game one -- but not the best way to start things either. Through four contests with the other four power conferences, the ACC is just 1-3, though the Clemson victory is able to cover up most of that for the time being.

The Orange will travel to face off against Chicago's Big Ten Team (yeah, that's for real) in a game that could get ugly. The Wildcats are coming off a huge road victory against Cal in which Northwestern racked up 508 total yards en route to a 44-30 victory. Trevor Siemian handled most of the passing duties, throwing 18-29 for 276 yards. Venric Mark was held to just 29 yards on 11 carried with junior Treyvon Green stacking up 129 yards on 16 carries. The silver lining is that the Wildcats gave up 548 total yards, opening the door for Drew Allen and Jerome Smith to have nice bounce back games.

This wasn't a pretty game by any stretch of the imagination. Syracuse had an opportunity to steal one from a very good Penn State team. They didn't. It happens. Make sure to leave you comments below, I'd love to get a mailbag going for next week's edition.