What the P-S Won't Tell You About...Tulane

Syracuse's season got right back on track thanks to our new best friend, Terrel Hunt. With one game to go before our inaugural ACC season truly begins, can Hunt and the rest of his Orange brahs drop in and rip it against the Green Wave?

Share All sharing options for: What the P-S Won't Tell You About...Tulane 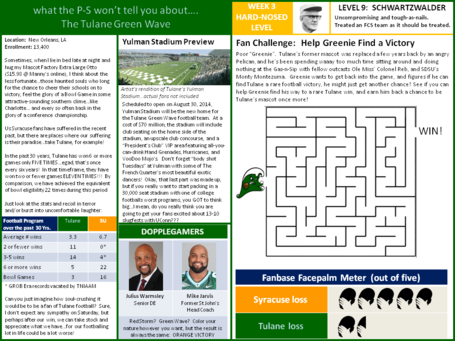 In the classic football movie "Remember the Titans", the TC Williams football team had a seminal moment that catalyzed the team, and took them from an ambling group in search of themselves to a well-oiled machine of football awesomeness. To the casual observer, that moment seemed to come from Coach Boone's team "retreat", where prejudices dissolved, clever nicknames were given, and segregation turned to integration...

Oh, casual observer, how wrong you are!

Anyone who knows anything about that team (and I consider anyone who is bothering to read this as being someone who is wise beyond their years), knows the real seminal moment came when, after repeatedly failing to move the TC Williams offense, starting quarterback Jerry "Rev" Harris relinquished his position to backup Ronnie "Sunshine" Bass. It seemed a necessary move. And within an instant, Sunshine took the reigns of the offense, and confidently marched TC down the field for score after score. TC went on to destroy every racist team in their path, erased all bigotry in the state of Virginia, and captured the State football title...all to the soundtrack of Marvin Gaye's "Ain't No Mountain High Enough"...sweet!

So watching Terrel Hunt enter the game and immediately guide the SU offense time and time again against a admittedly outmatched Wagner team was akin to watching Ronnie Bass once more. Tulane will very likely present a much bigger challenge for our offense on Saturday, but there is something about our own "Sunshine" that leads me to believe our offense and team have turned a corner on our this season...there's excitement to come Magicians!

In this week's preview, we introduce you to one of our nation's least successful football programs, The Tulane Green Wave. We marvel at how a team could only manage roughly 3 wins per season over the past 30 years and NOT be called Temple. We introduce you to NOLA's newest gem of a stadium, and try to help Tulane's down-and-out former mascot find a path back to glory. Enjoy, and Go Orange!