The Quest For Belk, Week 3 Update: One Down, Five To Go

At 1-2, the Syracuse Orange take one small step back in the right direction towards the Quest For Belk...

Share All sharing options for: The Quest For Belk, Week 3 Update: One Down, Five To Go

It's hard not to look into Syracuse's 54-0 win over Wagner too much. On one hand, we basically just beat a high school team. On the other hand, it was nice to see everything go smoothly (once Terrel Hunt entered the game) for a change. Most of us expected Syracuse to struggle and very few expected Syracuse to cover the 28.5-point spread. But they did not struggle and they covered the spread and then some.

So, at 1-2, the Syracuse Orange take one small step back in the right direction towards the Quest For Belk... 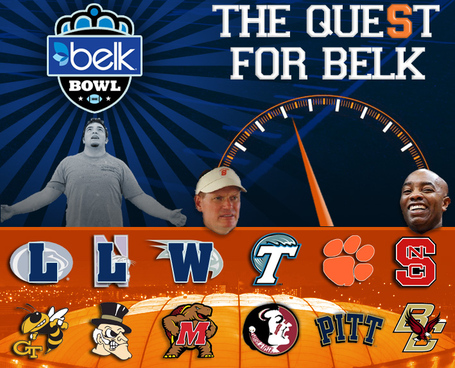 Normally, we'd have the W be orange but when you win in blue, the win is savored in blue. The expectation before the season was that Syracuse would be at least 2-2 by the end of next week. They're still on the track to do, and fulfill their mighty Quest.

Man, that Penn State loss is just gonna sting the better and better Terrel Hunt gets, isn't it?

Meanwhile, who else is looking forward to that Wake Forest game? Seriously, we might have to suck it up for a while but four of the last five games of the season are all winnable.