The Syracuse Orange Love Blue Except When It Hates Blue

Syracuse football trotted out all-blue uniforms on Saturday. Which is fine, except that we spend all basketball season hearing how blue isn't a school color.

Share All sharing options for: The Syracuse Orange Love Blue Except When It Hates Blue

They might fall more under the "new combination" label than "new uniform" label, but this weekend we got to see what happens when the Syracuse Orange blue themselves. 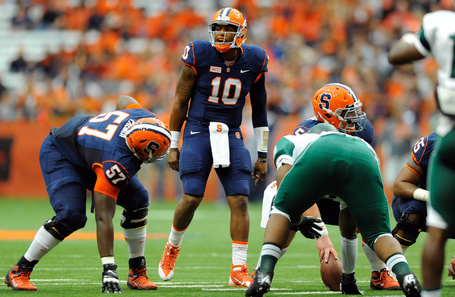 I like the look. I'm a sucker for same-color jersey & pants combos. And if Syracuse wanted to break out an all-white combo, or dare I say, an all-orange combo, I'd be up for the discussion.

It's interesting though that the week we were told we might see blue helmets, we saw blue pants instead. Of course, that also begs the question...is the all-blue uniform, head to toe, in our near future?

My guess...Syracuse breaks out a different look next week against Tulane, which ultimately serves as the lead-up to the big reveal, which will take place in front of a nationally-televised audience against the Clemson Tigers.

I don't want to speak out of turn too much since we don't know what else is coming but I'm left with two thoughts about Syracuse's uniform color choices moving forward...

1. I've said before that there has never been a more important time to wear orange. Obviously, it's our friggin' name. But we've entered a conference where four different opponents wear and feature orange in their uniforms. So while I'm fine with blue (especially given any alternatives), I refuse to believe we're not focusing on orange-afying our next round of jerseys. My hope is to see an orange jersey go with that blue helmet when it debuts, but, I've been disappointed before.

2. The reason we're called the Orange and not the Orangemen is because DOC Gross is a savvy marketer. It's about branding. It's about a unified vision of what a Syracuse Orange athletics squad looks like across the board.

And that's why it's so confusing that while Syracuse Football is blueing itself silly, Syracuse Basketball has basically declared war against the color blue. Blue is no longer in the uniforms. Blue is no longer on the basketball court. And when asked, SU officials say that blue isn't an official school color.

SU Basketball, and lacrosse, have become all about the orange (and the grey, as it were).