A Brief History Of The Storied Syracuse - Wagner Football Series

The helmets, the history, the tradition, the pomp, the glory. There is nothing quite like the majesty of the Syracuse-Wagner rivalry.

Share All sharing options for: A Brief History Of The Storied Syracuse - Wagner Football Series

When I say Syracuse Orange vs. Wagner Seahawks, so many things come to mind.

The helmets, the history, the tradition, the pomp, the glory. There is nothing quite like the majesty of the Syracuse-Wagner rivalry.

Just ask Mark May and Skip Bayless and they'll probably tell you their greatest childhood memories are sitting in front of the TV watching Syracuse and Wagner battle for nothing less than the glory of America.

So as we prepare for the latest incarnation of this storied battle, let us look back on where it came from and how it became college football's paramount match-up.

1881: The rivalry begins on a patch of grass behind the Hall of Languages as Syracuse accept a challenge from nearby Rochester Lutheran Proseminary to engage in one of these new fangled footed ball contests. The Syracuse Pinkmen were led by halfback Stephen Davis "Steve-Dave" Syracuse, son of the school's namesake, Ichabod Rautins Syracuse IV. On the other side, Dicky Von Wagner led a stout Rochester Lutheran Redskinned Redmen Savages squad (Ed. Note: Please understand, this was a different time). The game would end in a 0-0 tie despite the best efforts of the RLP cheer captains to urge on their squad with the school fight song...

"Let's scalp'm, Redskinned Redmen!
Scalp'm real good.
Cause we're godless heathen savages.
And that is what we shall do!"

(Ed. Note: Again, I really have to impress upon you this was a very, very different time. A time when people used ugly Native American stereotypes without repercussions. Not like today).

1892: Syracuse was considered a heavy favorite headed into this year's match-up. As legend tells, Wagner wingback Oswald Mandias gathered the team up before the game, turned to the Syracuse squad and screamed, "My name is Oswald Mandias, wing of wings: Look on my two-yard gains, ye Mighty, and despair!" The Wagner crowd erupted. The final score... 0-0.

1913: Wagner College relocates to Staten Island and does not inform Syracuse of the move. The Orangemen load up the buggy and travel all the way to Rochester only to find out when they get there that Wagner is gone. They send a sternly-worded telegram to Wagner, which is promptly ignored. Syracuse coach DeForest Cummings tells Wagner by second telegram that Syracuse will be there on the fifth of November and if they know what's good for them, they'll be ready. Reluctantly, Wagner was ready when SU arrived. The game ended in a 9-9 tie. To this day, Orange fans jam the quad and sing "Remember, Remember The Fifth Of November" to honor the grand tie.

1927: Under pressure from local tribes and protesters, Wagner finally decides to scrap the Redskinned Redmen Savages nickname and mascot. Some of the replacements bandied about include the Wagner Island Folk, Wagner New York's College Team and Wagner Wangers. As a tribute to Staten Island, the school chooses a name that represents the notable aspects of their home...the Wagner Stinkhawks. Two days later, they changed it to Wagner Seahawks. Syracuse and Wagner tied 6-6 that season.

1933: No record exists but rumor has it that, due to a sickness that put every Syracuse player in bed, head coach Vic Hansen played Wagner by himself. The final score was 7-7, but, the score was not indicative of what a blowout it was in favor of Hansen.

1942: The game was cancelled due to World War II. Unfortunately, no one told Syracuse and Wagner, who finally realized it after playing for five hours despite not seeing any fans or refs. Tied 28-28, they just walked away, cause, what was the point, you know?

1944: Wagner showed up to the game with a secret weapon: The Ark of the Covenant. Late in the fourth quarter with the scored tied 14-14, Wagner opened the Ark, unleashing a torrent of spirits that immediately judged the souls of every Wagner player and coach before melting their faces right off. When it was all over, Syracuse fans and players all looked at one another, looked back at the empty space where Wagner's football team used to be, looked back at one another and all slowly backed out of Archbold Stadium, never to speak of the incident again. It is rumored that the Ark now rests below Kimmel Food Court and that the soul-eating power within is the secret to Sal's Sassy Sauce.

1955: Expecting Jim Brown to lead them to their first victory in the series, the Orangemen were confused when Brown didn't show up for the Wagner game. In truth, a group of Wagner students told Brown that he couldn't beat them in a lacrosse game. The football game ended in a 6-6 tie. No one knows the outcome of the lacrosse game Brown played those Wagner students in. Or the whereabouts of their bodies.

1961: Ernie Davis ran wild for 176 yards and three touchdowns against Wagner. But the refs were all distracted by Wagner's devious manager, Classy Freddie Blassie. With their backs turned, Wagner hit Ernie Davis with a steel chair and went to pin him. The ref turned back and began to three-count but then noticed Wagner's feet were on the ropes in an attempt to get leverage. Wagner was DQ'd and the game was called with the official score of 21-21.

1978: In the final game at Archbold Stadium, Syracuse and Wagner players were told the losing team would have to help take the stadium apart afterward, without union benefits. After nine hours, the game was called as a 10-10 tie. After being told they'd both have to work without union benefits, both teams went on strike. Equal pay for equal play!

1987: History books will tell you that Syracuse went 11-0-1, and Wagner went 13-1, winning the D-3 National Title. What they don't tell you is that the two teams met that season in a Brooklyn back alley. The game ended in a 17-17 tie but it was deemed unofficial by the NCAA due to being played in a Brooklyn back alley, which is not a sanctioned place to play a college football game, even if Dick MacPherson still thinks otherwise.

2005: New head coach Greg Robinson was ecstatic following Syracuse's 13-13 tie against Wagner, claiming, "we really went out there and won the game in every way except in the actual way." Robinson added that he appreciated the way Wagner "fought the fight" but felt Syracuse "fought the fight a little fightier" before saying Syracuse was "an icicle about to burn up."

2010: Bronx-born Doug Marrone, who had previously said that coaching Syracuse was his "dream job," added that tying Wagner was his "dream result." He lived the dream as SU and Wagner played to a 20-20 tie that year. Upon achieving his dream, Marrone went AWOL and was found the next morning in Tottenville Beach shirtless with a half-eaten bologna sandwich in one hand, a half-eaten Dove Bar in the other and five empty Dove Bar boxes at his feet while singing Sweet Caroline.

2012: A deadly neurotoxin is released inside the Carrier Dome by SU professor Peter Weller (pictured here). The gas kills every player, coach and fan inside as well as every Syracuse fan in the world, somehow. The FBI sends Fringe Division to find out what happened. They make some witty quips. They say a LOT of exposition. Walter Bishop says something childish. And eventually, Dr. Bishop figures out that by going back in time, or something, he can stop the toxin from being released. Every Syracuse fan is alive again but, because of time displacement, or whatever, they no longer remember the game or the entire Syracuse-Wagner football series. The game ended in a 14-14 tie, FYI.

So there you have it. 131 games. The series is currently tied 0-0-131. Will this be the year Syracuse finally pulls ahead. We shall see. Unless, I guess, we get Fringe'd again. 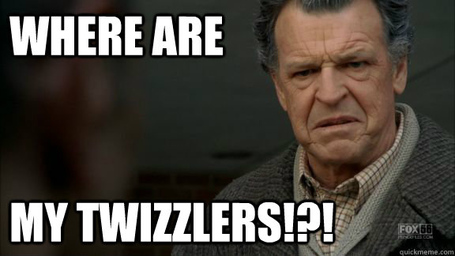