What The P-S Won't Tell You About... The Wagner Seahawks

Share All sharing options for: What The P-S Won't Tell You About... The Wagner Seahawks 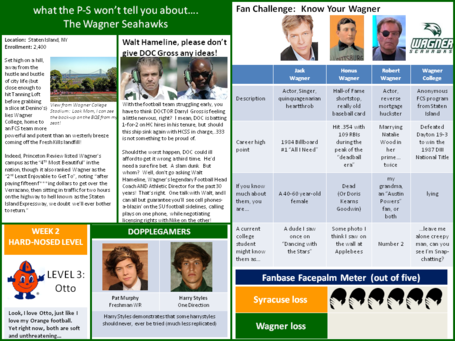 I'm sure I am like most of you when it comes to the beginning of a football season...particularly in the post-Pasqualoni era. You can't honestly know what kind of team we have prior to our first few games, yet it is the human nature of us all to have a slightly more orange-tinted view of our guys in August. That's how it should be.

For me, you don't really know what you've got until after the second game of the season, when patterns emerge, and real comparisons can be made against unquestionably decent teams like Penn State and Northwestern. So here we are, two games in the can, ten to go, and the reality we are facing is one that is really uncomfortable for a fan base that hasn't shaken the memory of 2005-2008: as of September 10, 2013, Syracuse Football is not very good...

Yeah, it's frustrating, but HCSS and his team know we can start turning this mess around, starting with a game this weekend in the Dome against a team that surely is overmatched. This, followed by the Tulane game, gives us the easiest two games on our schedule and we could very well be sitting here at 2-2 heading into the Clemson game. Hey, 2-2 is right where I thought we'd be! And if you can forget about just how bad these first two weeks were, you might be able to convince yourself to put those orange-tinted shades on once more.

In this week's preview, We take a tour of beautiful Wagner College, an oasis of leaves and stone amidst the traffic-filled atoll known as Staten Island. We introduce you to Wagner's head football coach, and Athletic Director, who incredibly are the same person! And we help you understand the difference between Wagner College and America's other, more famous Wagners.