Syracuse Football & The Quest For Belk

Share All sharing options for: Syracuse Football & The Quest For Belk

We have quested for so many things together, Syracuse Orange fans.

We have quested for a mythical city called Toronto.

We have quested for the sweet, sweet nectar of Beef.

Now, as we begin our inaugural season as members of the ACC, we must quest anew. We may not have ever fulfilled our hopes and dreams (though we found Pinstripe-y ones instead). However, that doesn't mean a valiant warrior simply ceases to heed the call of adventure.

And so, I give you, The Quest For Belk. 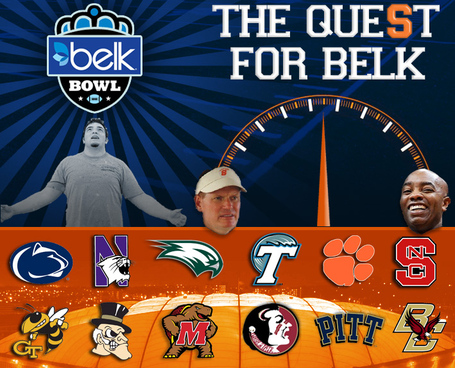 You know what we're doing here by now. Syracuse fans are supportive and love their Orange, but they're also somewhat realistic (at least until basketball season). We're not saying we need a National Title or trip to Pasadena to make us happy (though we would not turn down either). We set goals that are slightly more attainable.

If you're wondering what a Belk is, it's apparently a department store. But really, it's so much more. It's an idea. It's a moment in time. It's a state of mind.

Say it with me.