Syracuse vs. Penn State TV Coverage Map: ABC For Some, ESPN2 For Others, Miniature American Flags For Everyone

The TV coverage maps are out for the Syracuse - Penn State game.

Share All sharing options for: Syracuse vs. Penn State TV Coverage Map: ABC For Some, ESPN2 For Others, Miniature American Flags For Everyone

The Syracuse Orange and Penn St. Nittany Lions will play each other Saturday for a national television audience. As to which channel you'll be able to watch them, that depends on where you live. 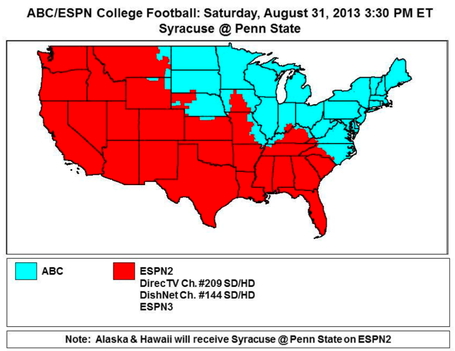 Obviously, folks in New York, New Jersey and Pennsylvania will get their SU-PSU on ABC. So will the Midwest, New England and Mid-Atlantic. As for the rest of us, it's off to ESPN2. That's actually better for us West Coasters since otherwise we'd be waiting for the moment ABC cuts away to some terrible Pac-12 game instead.

(Actually, the other game that ABC will be showing is No. 13 Oklahoma St. vs. Mississippi St.)

Kudos to any SU fans on vacation in Alaska or Hawaii. You're all set, too. Guam SU fans? Tough s***.