What The P-S Won't Tell You About...Penn State

Welcome to a new season of "What The P-S Won't Tell You About...," where we are introduced to a whole new set of conference and non-conference friends. As we pack up and head to The Meadowlands, let's learn more about our hard-partying adversaries from the South (not that South) who will more than likely turn this intimate little non-true home game into an informal "white out".

Share All sharing options for: What The P-S Won't Tell You About...Penn State 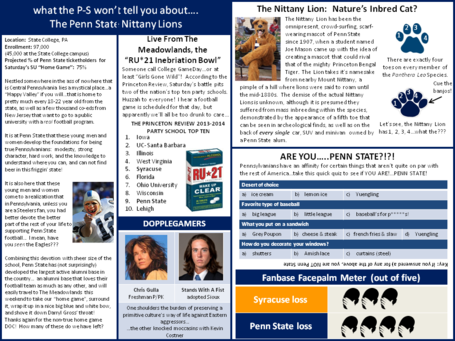 Penn State...a name that (if we try hard to forget about the last two years) evokes much of what its proud residents are all about: Grit, determination, an absence of nonsense, and a whole lot of big, strong, ugly guys whose names end in utz, ski, or czek.

If we look at the history of Northeastern football in its entirety, the Ivy's can claim ancient success, Syracuse and Pitt can claim dominance in selected eras, and Rutgers can dubiously claim that they called "shotgun" on the first ever game. But it is Penn State that has been the standard bearer. The constant.

That the incompetence and fear of the Big East's non-football membership largely forced Penn State into the arms of the Big Ten is one of the great tragedies of Syracuse football. We can have our irrational hatred of the Nittany Lions for 60 minutes, but the fact is this program was the footballing soul of our region...when it moved to identify itself with the midwest, the level of respect for Northeastern football took a major hit. One that still hasn't yet recovered...just ask the media, many of whom can't seem to be bothered enough to accurately cover Syracuse football these days despite our near miraculous resurgence following the hell of 2005-2008.

Enjoy the preview and Go Orange!...as always, it's never meant to be taken seriously.