Get To Know Your Orange Man - #41 Lewellyn Coker

The "Get To Know" series continues with Senior Linebacker, Lewellyn Coker.

Share All sharing options for: Get To Know Your Orange Man - #41 Lewellyn Coker

2012 Stats: After joining last year's "tank" goal-line offense from the special teams, he became the muscle escorting Adonis Ameen-Moore into the end zone on more than one occasion. In all 13 games, he recorded nine tackles and a fumble recovery. He also caught his first career touchdown pass in that epic game against Louisville.

2013 Projections: He sits behind Cameron Lynch on the depth chart, which means they're keeping him on defense instead of returning him to special teams. Given his successes last year, albeit on offense, there's no reason to think he won't continue to contribute.

How'd He Get Here?: There was interest from Cincinnati, Wisconsin, WVU, and Louisville, but Syracuse was the first to offer, and he took it.

"I was happy; I needed more things to do. I'm a great player, so I decided to say yes to the coach and help both sides."

Links of Wonder: Check out this Michael Cohen piece for more on how the "buldozing duo" of Ameen-Moore and Coker gave the offense new life.

What Does Shafer Think: When he was the defensive coordinator, Shafer appreciated that "during bowl practices, [Coker] really showed up."

Interesting Nugget O'Interest: Apparently, he was always a bit of a bulldozer. Even in high school.

Let Us Get a Good Look Atchya: This was the scene after Coker's touchdown during the Louisville game. 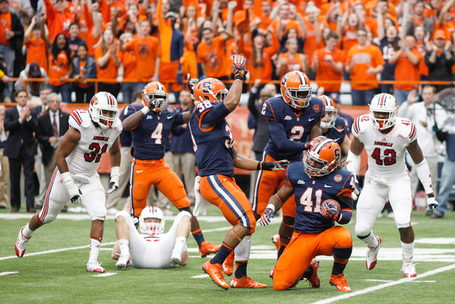