Syracuse.com basically dedicated the editorial budget of a small nation to talking about #hardnosed today.

Holy moly, SOMEbody held an editorial meeting earlier this week to discuss the many ways they can write about Syracuse Orange coach Scott Shafer's catchphrase "hard-nosed."

Syracuse.com basically dedicated the editorial budget of a small nation to talking about it today. Not that I'm complaining, the more "hard-nosed," the better.

First, there's this remix video from his introduction press conference in which a throwaway line became a catchphrase...

When they finally build the ShaferBot 3000 to coach all away game, at least we know what he'll sound like.

As you may have seen from Coach Shafer's Twitterfeed, he's not the first SU coach to covet a hard-nosed style of play. Ben Schwartzwalder was the original hard-noser in town, even leading Syracuse to victory in a "battle of the hard-noses." Goodness.

Chris Carlson tracked down some incoming SU players and language experts to figure out where the phrase actually comes from.

Hard-nosed got its start ... as a type of ammunition. Soft-nosed or expanding bullets were first produced in the second half of the 19th century.

Suddenly, I don't know if locking the Dome doors is such a good idea, legally-speakking...

And finally, they tried to get a meme started... 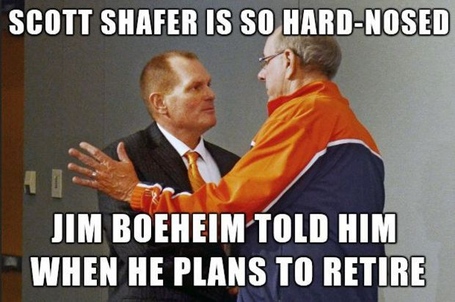 Here's the one question that remains...I know it's technically "hard-nosed," but can we just go with "hardnosed" instead and just pretend that's right? It's cleaner and saves me seconds on having to find the -.