Huge recruiting news on a Sunday as four-star WR K.J. Williams commits to the Orange.

Syracuse Orange football fans, start thinking about The A.J.-K.J. Connection because it could be the future of the Syracuse offense.

K.J. Williams, a four-star wide receiver from Bethlehem, PA, and cousin of SU QB commit A.J. Long, verbally-committed to play for the Orange in 2014.

Williams, who has been milking the whole process on Twitter for a while now, milked the crap out of it on Sunday as well...

Williams was said to be choosing between SU and Michigan but also had offers from Pittsburgh, Rutgers, Wisconsin, UCLA, Missouri, UConn and more.

Williams moved Syracuse up Rivals' 2014 rankings from 71st to 57th, proving just how big a get he is. He is the highest-rated member of the 2014 class, the 154th best overall prospect according to Rivals and is the highest-rated commitment that the Orange have received since 2008 when Marcus Sales and Averin Collier, both four-star players, committed. (Let Collier be a quick reminder to you that these things don't always pan out). 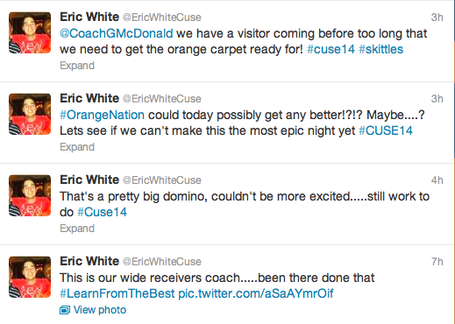 Michael Cohen has more on why Williams chose Syracuse. In the meantime, go watch some highlights and get giddy.