Get To Know Your Orange Man - #64, OT Daniel Anyaegbunam

Share All sharing options for: Get To Know Your Orange Man - #64, OT Daniel Anyaegbunam

2012 Stats: Daniel did not see any playing time last season. Or the year before.

2013 Projections: The walk-on is, as of this moment, the backup at Right Tackle. There's likely to be a lot of competition from young scholarship linemen, such as Jon Burton. So if Daniel has any inkling of seeing the field, he's still got work to do.

How'd He Het Here?: Dan started his career at Morehouse College. He played in one game for the Maroon Tigers and then decided to transfer.

Money Quote: I don't have anything so instead I'll let you know that his last name apparently means "May God protect you from the hurtful of adverse views of others."

Links O'Wonder: Here's a pic of Dan back when he wore 94.

Tweets of Wonder: He keeps his tweets private. Fair enough.

What Does Shafer Think: No idea.

Interesting Nugget O'Interest: Daniel attended summer school at Harvard (yes, that one), and had a 3.7 GPA.

Let Us Get a Good Look Atchya: 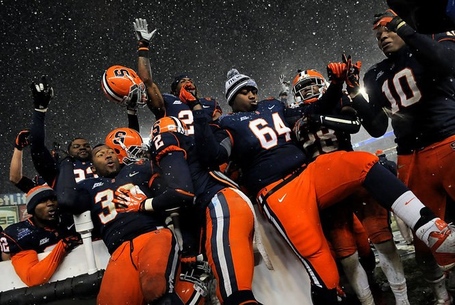