Get To Know Your Orange Man - #78, OL Jason Emerich

Get to know Syracuse's Center of the Future today.

Share All sharing options for: Get To Know Your Orange Man - #78, OL Jason Emerich

Get to know Syracuse's Center of the Future today.

2013 Projections: Emerich is a good name to keep on your radar since he's basically Macky MacPherson's heir apparent at the Center spot. And if MacPherson goes down at any point, Jason's the most likely guy to crouch down in his place.

How'd He Get Here?: Citing the family atmosphere and the quality of the coaches and players, the Pennsylvania hog-molly chose us over Akron (obviously), Buffalo, UConn, Temple and UCF.

Money Quote: I really got a good feel for the coaches, and we get along great. I’m real excited about the football program. I think Coach Marrone has it going in the right direction."

Tweets of Wonder: From last year... 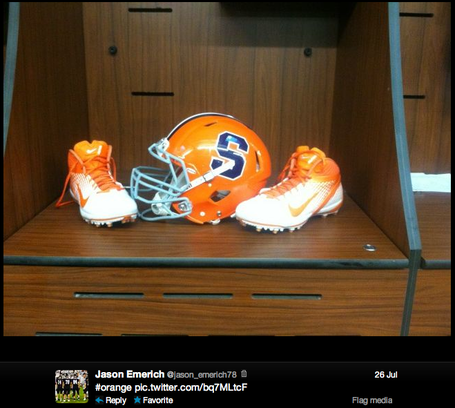 What Does Shafer Think: The closest I can get is from Greg Adkins last year - "Emerich playing with the (second team) almost every rep in camp is just valuable experience."

Interesting Nugget O'Interest: Emerich participated in the Big 33 Classic, which pits the best high school football players from Pennsylvania and Ohio against each other. It's a pretty big deal and cool to see a Syracuse recruit involved. Marvin Harrison once played in the game.

Let Us Get a Good Look Atchya: