In April 2010, Syracuse RB Delone Carter assaulted an SU student who threw a snowball at a car he was riding in. Now it's time to pay up.

Share All sharing options for: Hey, Remember When Delone Carter Punched A Guy?

Back in April 2010, America learned a very important lesson.

Do not throw a snowball at a car that includes amongst its passengers one Delone Carter for doing so will open up your face to being punched by a guy whose arm looks like this: 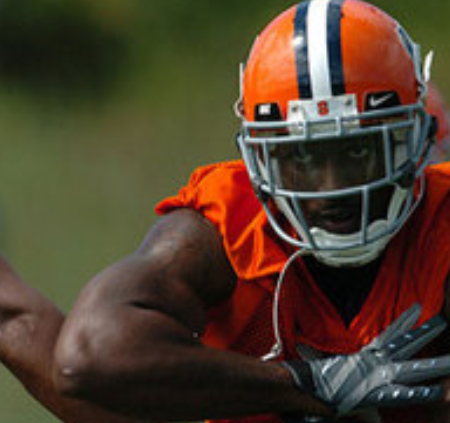 In case you forgot, this is what happens.

The incident almost derailed the Syracuse Orange running back's college career, not to mention could have led to jail time and ended his pro prospects. Carter is now a member of the Indianapolis Colts and a millionaire (one assumes). Hence...civil trial time.

Jury selection has begun for the civil trial to determine how much former Syracuse University football star Delone Carter will pay for punching a fellow student in 2010.

Carter, who now plays in the NFL for the Indianapolis Colts, has already been found liable for the incident by State Supreme Court Justice James Murphy.

The issue for jurors this week will be in determining the monetary amount William "Jay" Hotaling should be compensated for his injuries.

Yeah, as much I'd love to tell you that Carter was within his rights, he was not. I don't think this end result comes as any surprise as this is a clear example of "when keeping it real goes wrong." Here's what Hotaling says he suffered due to the beating:

Hotaling says he has suffered a concussion; multiple facial fractures; swelling; severely damaged facial muscles; shattered cartilage in his right ear; a dislocated and permanently damaged jaw; an air bubble behind his right eye; blood in the sinus cavity; adjustment of the sinus, eye socket and nasal cavity; various abrasions and contusions; and other injuries.

Man...remind me how Doug Marrone, he who threw guys off the team for missing meetings, let Delone back on the squad?

The trial is expected to last no more than a week.

By the way, SB Nation, can we do something about Delone's photo here?