What's wrong with this picture? Discuss...

It's Friday and lunchtime, so I figured to lighten the mood a bit and share this photo that breaks down New York State's regions via food or booze.

Now, being a resident of the Finger Lakes region, specifically Ithaca, I will say there's a bit more here than just fake wine made by imported grapes and lots of sugar.

I say this because the Ithaca Beer Company makes some solid beer and there's a lot of amazing food in the area -- though, we're really not known for anything. Expect maybe the Rongovian Embassy, which no longer is in business.

Anyway, I know Syracuse is more than just Dinosaur BBQ -- I mean just ask Jim Boeheim, he will tell you -- so discuss food, booze and other things. 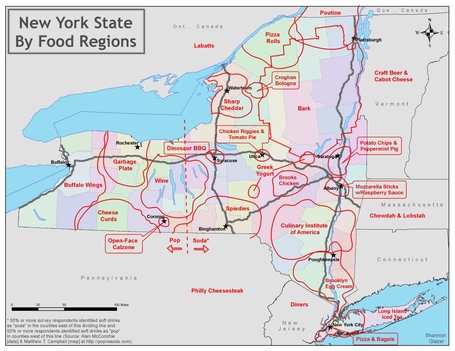