Syracuse vs. Michigan: The Call Heard 'Round the Georgia Dome

Was is a block? Was it a charge? Should the call have even been made? Let's clear the air.

Share All sharing options for: Syracuse vs. Michigan: The Call Heard 'Round the Georgia Dome

This is how one Brandon Triche, winningest player in Syracuse men's basketball history, ended his collegiate career. 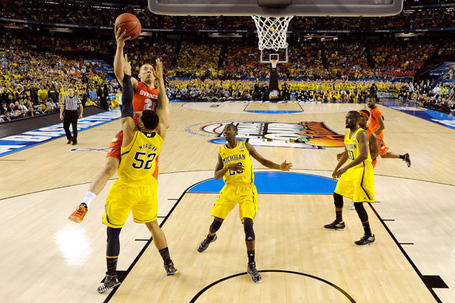 I'm not going to debate whether or not it was the right call (though feel free to do so in the comments). Personally, I tend to give the officials the benefit of the doubt when it comes to the block/charge call. It's a tough call in all but the most blatantly obvious situations. I don't envy the zebras for having to make it. And despite some very prominent (and not so prominent) talking heads stating loudly that it was the wrong call, I'm not going to jump on the refs for deeming it a charge.

What I will say, though, is that there should have been no call at all. It was a close enough call to play on and allow the guys in the orange and maize yellow uniforms decide the outcome of the game. This charge, for all intents and purposes ended the game.

Sure, there were 20 seconds left on the clock. And, indeed, Syracuse was able to continue to foul Michigan to get the ball back. But without any play makers left (Micheal Carter-Williams had already fouled out on another questionable call), Syracuse has little chance of coming out with a win. Even if they have gotten the three points needed to tie the game in the final seconds, it was unlikely that the Orange would have survived another five minute overtime period with their starting back court sitting on the bench.

And that's why it was a shame that call was made. The officials are supposed to give both teams an equal opportunity to emerge victorious. In this case, they robbed Syracuse of that chance. I'm not advocating that official's swallow their whistles in crunch time. They have a job to do up until the final buzzer sounds. A prudent official, though, knows to let the players play except when a call is obvious and irrefutable. This call wasn't.