While the Syracuse Orange losing to the Michigan Wolverines was the major event of my weekend in Atlanta, there were other learnings and opportunities to be had. Before we say goodbye to this Final Four and this season, I thought I'd share some things I took away from my time here.

Share All sharing options for: 2013 Final Four: Ten Things I Learned In Atlanta

While the Syracuse Orange losing to the Michigan Wolverines was the major event of my weekend in Atlanta, there were other learnings and opportunities to be had. Before we say goodbye to this Final Four and this season, I thought I'd share some things I took away from my time here.

I Am Old - There was a time in my life when the thought of grabbing a pitcher of Bud Light, a couple plastic cups, finding a table on a patio packed with other revelers and sitting there for seven hours straight would have been fantastic. However, I've come to realize that time was roughly twelve years ago. Nowadays? I'll take the quiet bar tucked away somewhere where I can nurse a beer and watch a game. Showing up in Atlanta, I headed straight for the official pre-game hangout, Hudson Grille Downtown, not really thinking about what I walking into. It was indeed the scene I described above. I lasted about twenty minutes and headed into the Georgia Dome to catch the second half of Louisville - Wichita State. I'm fine with this.

I Forgot How Shady Girls Are - Guys get the bad rap when it comes to doing sneaky shit and being shady but if there was a running theme this weekend, it was the amount of times I saw a girl being way craftier. Waiting in line to get into Hudson Grille, I can't tell you how many girls would get stopped at the door, told to wait in line and then just sidle over in front of me. By the time I threw up my hands and walked away, six different girls had pulled this trick. And then there was the concert at Centennial Park, where I lost track of how many girls pushed their way through the crowd to get a better view while displacing each person they passed. To quote Chris Rock, "Ya'll think ya'll slick. Ya'll ain't slick."

Syracuse Fans Are Great But We Also Have A Lot Of Mooks In Our Ranks - And I don't mean Mookie Joneses. I like to think we're a classy bunch, and for the most part, I think we are. But I got a stern reminder this weekend that we have some rather unsavory characters wearing orange as well. My favorite was the guy "trying" to start a fight outside Hudson Grille while letting his friends (mostly female) drag him away but not before getting in a zone defense-type stance for purposes unknown.

Syracuse As A Fanbase Doesn't Get Crazy: I don't want to get into a whole debate about how passionate we are, because I know we are, but compared to the Michigan, Wichita State and Louisville fans in the Georgia Dome on Saturday, we were probably the least outwardly excited of the four. While Michigan had multiple coordinated cheers and their student section seemed to be in constant motion, our fans were loud when expected to be but otherwise pretty quiet. I don't know if it's that Syracuse Pessimism that creeps in but by comparison, we seemed introverted.

Atlantans Must Order Groceries Online: I walked a good chunk of Atlanta over the course of two days and not at any point did I see a grocery store other than a couple corner bodegas. I have absolutely no idea where Atlantans get their quinoa.

When The Zombies Rise, We're All Doomed: Whenever we watch The Walking Dead or any show about a post-apocalyptic world where people attack one another and it becomes survival of the fittest, my wife always says she thinks it's unrealistic. That there's no way human beings would turn on each other like that. After witnessing Final Four crowds scratch, claw, push and generally manhandle the people around them for two days, I have no doubt that when life and death are actually on the line, The Walking Dead will look like Glee by comparison.

We Should Have Known: During the intermissions, the side scoreboards in the Georgia Dome put up the Syracuse logo on one side, the Michigan logo on the other side and played highlights in the middle. I thought this encapsulated the game-experience perfectly. 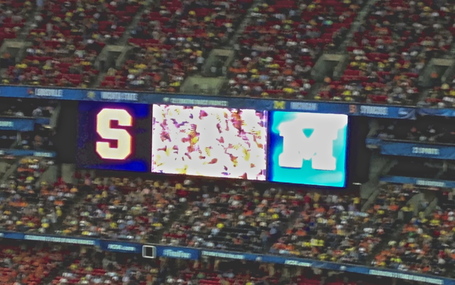 Something in-between sadism and masochism, this game existed.

Syracuse Fans Are Nothing If Not Resilient: It would have been easy for Syracuse fans to pack up the orange on Sunday, so not to draw attention to themselves. However, everywhere I went all day I kept seeing orange shirts, orange hats, orange bags and orange everything else. It was nice to see. Of course it could also mean everyone only brought orange clothing with them. That seems possible.

People Drink Terrible Beer: Excuse me because I'm holed up in the Pacific Northwest where there's a microbrewery on every street corner, but, this weekend was a good reminder that America still loves crappy beer. My goodness, so you're the ones putting away all that Miller Lite. Fine. My real gripe? When presented with a choice of Bud, Bud Light, Miller Lite and Yuengling, that anyone would choose anything except Yuengling. For shame...

Going To The Final Four Is Fun: Even with watching Syracuse lose the game, I'm so glad I came to Atlanta. To be around so many SU fans and to be in an environment that reminded me why I love college sports was just what I needed to give the fandom a little reboot and kickstart. Not to mention the chance to see a pretty solid outdoor concert (for free), eat some good food and put some faces to Twitter handles. The way Syracuse is playing basketball as a whole these days, there's a reasonable chance we'll get the chance to come back here again soon and wherever that Final Four is, I highly recommend everyone go if they can. Come for the basketball, stay for everything going on around it.