Today, we learned just how much support we can expect to get out of Alaska when it matters most...

Syracuse Orange fans are used to hearing that their road games don't really count as road games for various reasons. "A lot of Syracuse fans live here." "The game is being played on a boat." "Atlantic City is basically a suburb of Syracuse." Home Game is basically our mantra at this point.

Earlier this week, we learned that while we're not getting a lot of support nationally (which is weird since it's all home territory), we are getting love from a surprising contingent in Alaska's wilderness. According to Facebook, we're huge in Nome and Kodiak Island. Which is nice.

Today, we learned just how much support we can expect to get out of Alaska when it matters most... 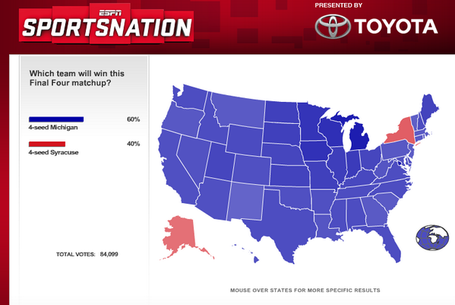 Oh and we'll remember this ACC. This map will be seared into our f***ing memories, I assure you.