The New York Giants traded up to the 110th spot and took Nassib so they could groom him behind Eli Manning.

Former Syracuse Orange quarterback Ryan Nassib did not meet the overblown expectations heaped on him but he did find what might be the perfect home for his NFL Career. The New York Giants traded up to the 110th spot and took Nassib so they could groom him behind Eli Manning.

For Nassib, he's going to a playoff-calibur franchise where he's going to learn from a two-time Super Bowl champ, get coached by a former Syracuse guy and play alongside his right tackle, Justin Pugh, who was also taken by the Giants in the first round.

It's pretty much the best case scenario. 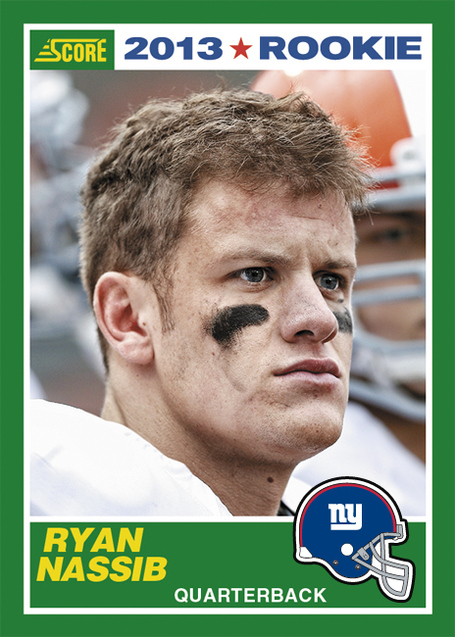 A lot of folks thought the Philadelphia Eagles might take Nassib earlier in the round but they opted for Matt Barkley instead. Nassib was an Eagles fan growing up so he was probably bummed about that, but playing in the shadow of New York City for a better franchise (Ed. yes, I'm a Giants fan) is a nice consolation prize.

David Carr has been the Giants' backup for a couple years now but Nassib will challenge for that spot. And even if he never sees the field for the G-Men, he'll have an opportunity to build a resume for another suitor.

The Giants see a lot of value in Nassib:

"(Ryan) Nassib (was) the highest player on our board, so we talked about it early this morning that if he was still there, there was no way we were going to pass him up again because he has too much value. We’ve been thinking about developing a quarterback behind Eli (Manning) for a while now and we think this is a perfect opportunity for us to get a young quarterback with a lot of talent – very smart, high test score, very productive, and again the value was too high for us to move on from.

Glad he was able to go somewhere he'll be appreciated.

(And by the way, way to #HonorYourContract, Tom Coughlin...)