This was a tough one...mostly because there wasn't a "AHA" moment with any of our players and the general...should I call it professionalism.... of making sure dumb stuff doesn't end up on Twitter. Regardless, two tweets got the most support making the winner...

This category was not as tremendous as in past years, either because my twitterfeed was too cluttered (very likely) or because Syracuse Basketball Players were given the "don't post dumb $#!+ on twitter speech and listened.

Regardless, that didn't mean we didn't find some golden nuggets buried away in the interwebs...

By definition of the S.O.B. bylaws, the award must go to a Syracuse University player or coach who had the best tweet during the defined basketball season. Thus, BY DEFINITION, Sean and MarshallSt brought forth this beauty from Jerami Grant's twitter/instagram of MCDubz, Triche, C.J. and MooMoo all in a hottub wearing winter clothes: 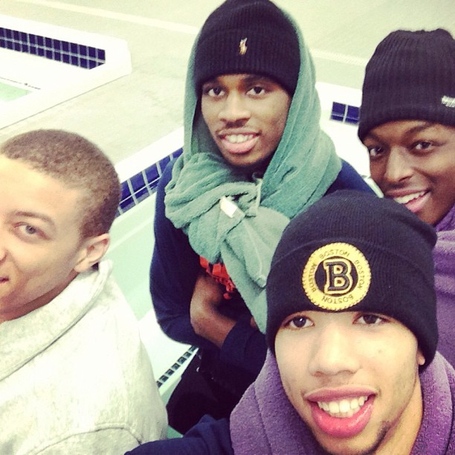 HOWEVER, there was one actual tweet that received just as much support but doesn't fit the criteria for a legal S.O.B. trophy.

@mookie21jones: This would of been the perfect time for Mookie jones to hit that three am I right or wrong cuse

Note: Mookie blocked me, pretty sure he blocked Sean as well. A screen capture of this tweet will earn the glory and praise of TNIAAM Empire.

As Dan so eloquently put:

The best part is, he's not totally wrong considering we had one scholarship guard available. Also, this is the most Mookie tweet of all time.

Kinda crazy, huh? So congrats to Jerami, but realize you have to step up your game next year to defend the title because you never know what Mookie will do next...