Due to recent developments, we have lowered the C.J. Fair Headband Threat Level from YELLOW to ORANGE (C.J. is staying!). 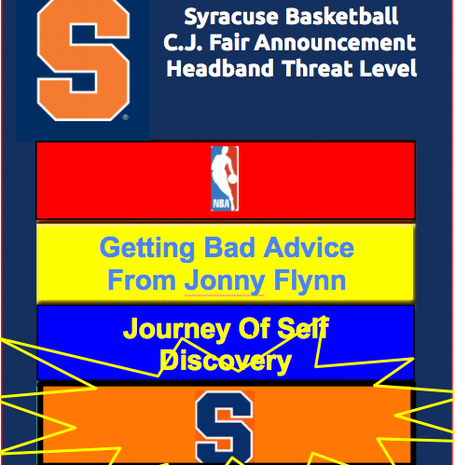 Due to recent developments, we have lowered the C.J. Fair Headband Threat Level from YELLOW to ORANGE (C.J. is staying!).

We have lowered the CJFHTL due to the announcement that the Commence Jubiliation Fair (H/T: Matt) is returning to Syracuse for his senior season.

"After talking it over with my family and my coaches, I decided another year at Syracuse was best for me," said Fair. "I'm excited about working hard with my teammates to put together another great season and graduating has also been a goal of mine."

Fair had considered entering this year’s NBA draft. However, after gathering information from the NBA’s Undergraduate Advisory Committee that indicated he was not guaranteed to be a first round pick, Fair elected to return to Syracuse University.

"This is great news for our basketball program and for C.J.," said Syracuse coach Jim Boeheim. "I believe he's just going to keep getting better and better as a basketball player and earning his degree is important."

Callmemaybe Jensen Fair will now enter the 2013-2014 season with a legit shot at ACC Player of the Year as SU's on-court leader and playmaker. He's a much-needed anchor for a team that will going through a big transition up top. Having Fair alongslide Rakeem Christmas, Jerami Grant, Baye Keita and DaJuan Coleman at the bottom of the zone is huge.

We now return you to your regularly-scheduled programming. Please start breathing again.