It's a question I'm betting you've been asking for months: What's the best SU photo out there? Well, look no further SU photo fan, I've got your answer!

The thing about Syracuse basketball is its reliable. You know, every season, the Orange will be a top 25 or much better team. One that has star power and role guys. A team led by a Hall of Famer who can't keep his finger out of his nose. And, above all, you know that the Syracuse Orange, no matter the edition, will provide amazing photographic moments.

So which photo was the creme de la creme? A tough question to answer, but for me, the following took the cake...er the creme: 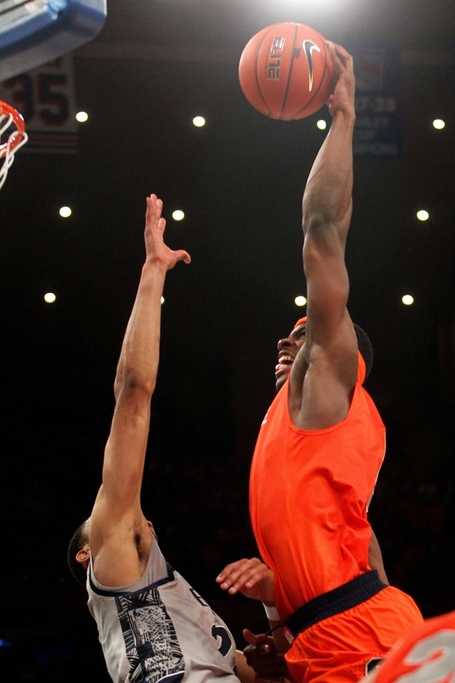 Is there a moment that symbolizes Syracuse's turn around from losing four of its last five, being humiliated on national TV against Georgetown, to rising up against those same Hoyas than C.J. Fair's dunk face on Otto Porter? Sure, that game was only in the Big East semis, but beating Georgetown caused Syracuse players and its fans to start thinking in broader terms.

Maybe March won't be so bad after all?! Fair threw down on Porter, announcing that, yes, Syracuse was going to win and, yes, this is still a dangerous team. Needless to say, that dunk pictured above inspired a lot of Tiger Woods style fist-pumping in Casa De McClusky.

That's just one man's opinion though, let's hit the TNIAAM roundtable, starting with the boss, Sean: 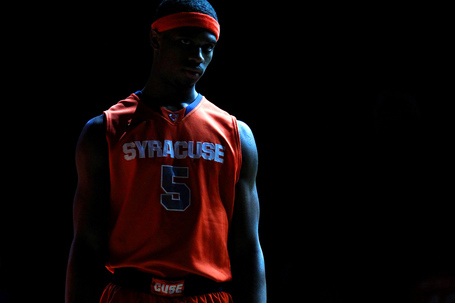 Andy goes with what would have been my choice if it wasn't for Fair's dunk: 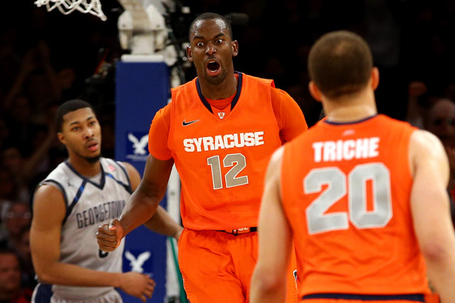 Anything with Baye crazy eyes.

(That photo is courtesy "K" from the comment section. All I can say, K, is thank you. Thank you so very much.)

Chris' choice was also comes from the comment section, via OrangeUglad, and it's damn cool: 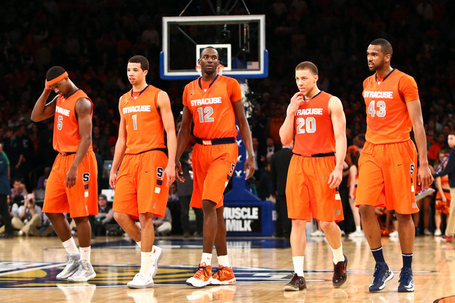 The one of MCW, Triche, JSizzle(TM), Baye and CJ walking to the bench that inspired all of the "Reservoir Dogs" comparisons. Those shots are always my favorite.

C.J. dunking on Otto Porter is an absolute classic.

are on the same page with me when it comes to Fair's dunk on Porter being the best SU Photo of the year.

John Cassillo picks the one photo that probably best symbolizes the euphoria of Syracuse beating Marquette to cap off the incredible run to Atlanta: 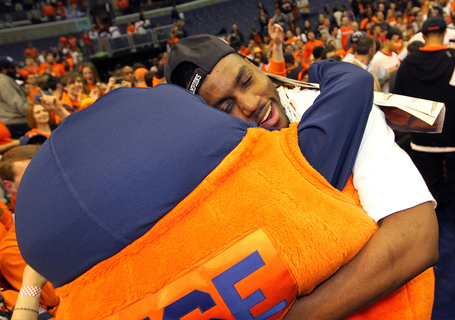 Rakeem Christmas hugging Otto after we beat Marquette. It was a great, spontaneous reaction that is currently my desktop wallpaper.

Jared feels the same way about Rak getting himself some Otto love!

Rakeem Christmas hugging Otto after the victory over Marquette. There's no contest here.

So, judging by the comments, this is actually a tough one to call. There were just about as many C.J. Fair nominations as there were Rak hugging Christmas and Crazy Eyes Baye Keita.

But going by the roundtable thoughts and the comments, I'll give the award for Best SU Photo to Rakeem Christmas hugging it out with Otto! Congrats to both!

And for Otto, it must be nice to have players giving love rather than punching him/her in the face. Actually, it wasn't always just the players beating down Syracuse's main squeeze (sorry):