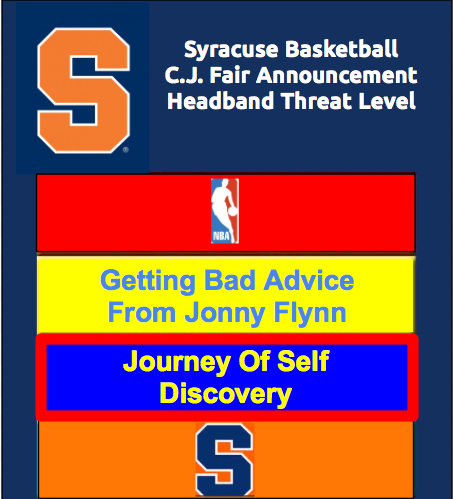 Due to recent developments, we have raised the C.J. Fair Headband Threat Level from ORANGE to BLUE (Journey of Self Discovery in progress).

We have raised the CJFHTL due to the announcement that the NCAA's deadline for college players who declared for the draft to return to school has passed and Cerebus Jackalope Fair has not publicly announced any decision.

Please note that this is not an indication that Carlito Jeffersby Fair is going pro. Since he never previously announced a decision to forego his senior season, he was under no requirement to make an announcement even though he has almost certainly received his assessment from the NBA evaluators by now.

Cranston Jalopy Fair now has until the April 28th deadline set by the NBA for early entrants. According to Syracuse.com, Carmaggio Jetacious Fair's father has confirmed that he will make a decision by then. As noted by Syracuse.com, the only difference now is that one Crimson Jaundice Fair makes his decision, it is final.

There have been no updates of note on Calico Jacksoncannery Fair's Twitterfeed or otherwise.

We now return you to your regularly-scheduled programming.