2013 NCAA Tournament: Diary Of A Hoya

Like the month of March itself, no one "goes in like a lion and out like a lamb" quite like the Georgetown Hoyas and their holier than thou fan base. Sit back and enjoy, as one such fan chronicles their now annual demise...

Share All sharing options for: 2013 NCAA Tournament: Diary Of A Hoya

4:30pm Let's dance!!! Does it get any better than Selection Sunday and St. Patrick's Day all in one! Eschewed the Guinness for a few bottles of '82 Grand Puy Lacoste (97 points baby!) because that's how I roll. Loss to 'Cuse at MSG will have the Hoyas fresh and playing with edge.

Can't wait for the tournament selection show!   So pumped!

6:45pm The committee gave us Florida Gulf Coast in Philly and the analysts are showing us the love! Bracket sets up nicely for a deep run. By the way, what and where the hell is Florida Gulf Coast??? It sounds like some fake university from a Baywatch episode. This is a totally win-able region.

Just checked the full bracket. High comedy! 'Cuse travels 3000 miles to play Montana in San Jose. Yeah, the NCAA's going to make it as hard as possible for Boeheim before they give them the death penalty! Seth Davis thinks Montana is primed for the upset, which would be classic! Even if they squeak by, there's no way they get past a loaded region with Miami and Indiana. Thank you God for loving me so much! 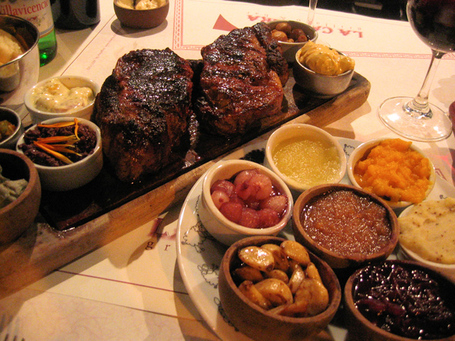 Check out this great steak I ate last night...paired it with an awesome '04 Melipal Malbec Reserva from Argentina in honor of Pope Francis! Reminder to find a 39 point wine to send to the editor of that Nunes Magician blog after the Grizzly Bears take those no talent ass clowns down!

10:30am Okay, so it was probably unrealistic to think Montana would win. But there's no way 'Cuse beats Cal in San Jose. Got a text from a friend I used to go to Bright and Insufferably Obnoxious Camp with a while back who went to Cal. He says if Crabbe and Cobbs get hot, they could win this one easily. 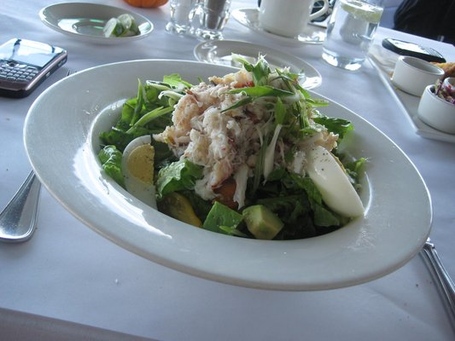 Check out this Crabbe Cobbs salad I made earlier today! Paired it with a delicious '05 Kistler Chardonnay.

Still sending a 39 point bottle to Nunes. Found out that wine ratings start at 50. Whatevs. Bought a bottle of Blue Nun, and pee'd in empty bottle of Johnny Walker Black. Add that together, and viola! A 39 point whine (see what I did there? Boeheim = whine)! Will put together the concoction immediately after Cal's victory.

5:50pm Okay Hoyas, let's get this warmup out of the way and give Ayegba and Bowen some reps ahead of the trip to Atlanta. Just booked my reservation at Bacchanalia in Atlanta for Final Four weekend!

9:02pm What. The. F@ck. This crap has to stop!!! Time for JTIII to go. Went through two bottles of '97 Phelps Insignia, but switched to whiskey.

Strange...that bottle of Johnny Walker Black tasted like it was turned...

Spent last night vomiting my own urine while listening to Radiohead on a continuous loop, and now the day goes from bad to worse as Syracuse beats Cal. Great, now they play at the Verizon Center of all places...if they win the region there we'll have to burn it down and find a new Gym.

Trolled Troy Nunes since I have nothing better to do. Why would they name a blog after the Congressman from the 22nd District of California??? I met that guy at an Austrian Embassy Series event last year and he's a TOTAL tool.

Anyway, there's something called "Taco Time in The Salt City" where they rate beers. Tacos and beer...how pedestrian...how Syracuse! (Note: came up with an awesome idea for Casual Hoya. Plan to start new blog series: "Tapas Time in The Capitol City" where we'll pair small plates with outstanding wines!)

Indiana - among the blue blood elite. Syracuse can not lose quickly enough. Or painfully enough! Oladipo shuts down the Orange, and Zeller is the perfect answer to the zone. Welcome back to the Verizon Center, schmucks...say, you can't spell schmuck without S U...I got to post that on Casual Hoya...instant rec!

Spending waaay too much time thinking about Syracuse...I had no idea just how dreamy Brandon Triche's eye are...just sayin'...

6:25pm F@ckedy f@ck f@ck! God, why do you hate me so? Can't get the vision of Cuse cutting down our nets out of my head...seriously, it's time to burn down the Verizon Center.

In the depths of depression. The one team out of 68 that simply can't win this thing is two wins away from winning this thing. I'm empty inside...

I'd give my whole cellar of Bordeaux first growths to erase this from my memory.

Seriously need to reevaluate my life, and start fresh. But first, I'm starving.

You know what sounds good? 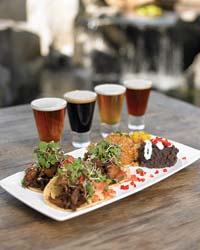