The curtain is about to drop on the 2012-13 season and possibly on the Syracuse career of Michael Carter-Williams.

@matthewmcclusky @nunesmagician MCW is as maddening to watch as Scoop was. One second you want him benched, the next he's winning the game

@matthewmcclusky He gets way too much hate from some SU fans. That said, he remains the most frustrating SU player I have ever watched

Michael Carter-Williams: superstar one second, sophomoric the next. Just ask for Orange fans' thoughts about the kid known as MCW:

Working on a @nunesmagician column...about Michael Carter Willams. Thoughts (all of them, good/bad) on MCW? Replys via Twitter make post.

...and watch the replys fly in.

@matthewmcclusky He's a victim of his own stellar play in the non-conference. 12, 8 and 5 is still a very good year

@matthewmcclusky Any NBA GM who drafts MCW with a first round pick has no idea what he is doing. Bunch of guards better than him.

Some responses more hash than others...

@matthewmcclusky @nunesmagicianre MCW : He should fake an injury the rest of the season if he plans on going pro. #StockDroppingEveryGame

Some more rational than others...

@matthewmcclusky MCW lacks any ability to make a reasonable decision with the ball once the clock gets under 2 min.

But one thing is for certain; Michael Carter-Williams elicits conversation.

And there's really the same basic thought at play here; we don't know what to make of Carter-Williams, but, like it or not, we all concede he's probably played his last game at the Dome.

Yup, despite all the growing pains Orange fans have watched the kid go through...

@matthewmcclusky @nunesmagician the mistake MCW makes over and over again is leaving his feet w/o knowing what he is going to do. Basic 101

...MCW is probably gone after the season ends.

But all of this...frustration...with a key player, a point guard, isn't anything new, right?

A list, in no particular order (obviously) of talented point guards that graced the Carrier Dome floor and spoiled thousands of Syracuse basketball fans with their unique, fun-to-watch skills.

It's also a short list of point guards who have, at one time or another, felt the wrath of those same fans. Players who have had to grow up in the bright lights glare of the Dome, of the Big East, of Jim Boeheim. Hell, Scoop Jardine's up and down relationship with fans, and his up and down play on the court, caused the Syracuse Post Standard to accurately title last year's season preview with the following cover: 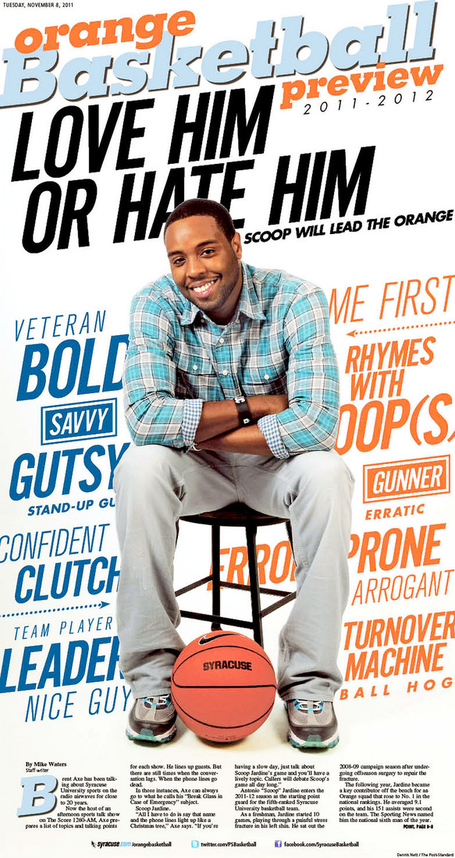 You could say Antonio "Scoop" Jardine was just one man, but most fans knew better (as Brian's earlier tweet pointed out). They saw the split personality on the court, the Good Scoop and the Bad Scoop. Good Scoop would make the right pass or have the onions to take and make the big shot. Bad Scoop would try too much or take a shot he had no business attempting.

If you replaced Scoop with Carter-Williams it seems like that could be the cover of every game program passed out at the Dome this season.

The difference is every single one of those point guards of the past, Scoop included, gave Syracuse fans more than one season to figure things out. Carter-Williams was an afterthought last season -- usually seeing action in blow outs. This season, even before tip-off against San Diego State, MCW was a projected NBA pick. Then the sophomore turned up the hype by putting up huge numbers -- near triple-doubles -- in the pre-conference schedule. Suddenly the lengthy point with a you-first attitude and a boatload of potential became gold to NBA scouts.

Most of us knew that the Monmouths of the world were not the Georgetowns of the Big East. Once the schedule started getting rough, Carter-Williams' impressive numbers went down. Jaw-dropping assists turned into bone-headed turnovers. Not exactly earth-shattering news; inexperienced players go through growing pains.

Leave it to a zombie to teach us the ways...(I wonder if Zombie Boeheim has a fascination with touching his nose, too?)

I have to wonder if this frustration with Carter-Williams and his up and down play would be there if he wasn't expected to jump to the NBA? What if MCW didn't have the preseason hype, and went through these ups and downs, would fans be more willing to accept the good and the bad because MCW was learning on the job?

@matthewmcclusky @nunesmagician He needs another year. Guys whose next team will be at the local "y" are routinely making him look bad.

I think we all probably agree with -- Carter-Williams does need another year to season his game, but, even now, with his numbers in decline and the team struggling, I don't think we're going to get that. I think he's still as good as gone. Potential is always a good passport to the NBA.

So what does it all mean; this Michael Carter-Williams Experience? Honestly, I have no clue. I started this column with an idea of floating a Twitter question to see what kind of response I would get -- which isn't really fair to Carter-Williams. Had I asked Orange fans about him in November or December or after a big win -- like at Louisville -- the responses would have been much different. But instead, in the midst of a three game losing streak, maybe I decided to pick some low hanging fruit.

Or maybe not. Maybe this is the perfect time -- when things are seemingly at their lowest -- to ask fans, the ones that have seen the most, their opinion on a key player. Either way, the responses to MCW did come in...pro and con.

@matthewmcclusky I hope the responses won't be all negative. Good player going through rough patch. With little help around him

And while some have a wait-and-see approach, almost everyone is frustrated by it all and most everyone also wants Carter-Williams back. One more season to grow, to get better. Translated: One more year to make Syracuse better.

This season, despite 23 wins and another tourney berth locked up, has been maddening for fans. Maybe Carter-Williams, like Scoop and the others, could be a scapegoat. Just remember that Brandon Triche has been just as frustrating as MCW, and James Southerland was suspended for something boneheaded and totally avoidable, Dajuan Coleman didn't deliver and then got hurt, and Rakeem Christmas' game is missing and someone needs to notify the authorities -- seriously! I'm worried.

But in the end, it usually comes back to the point guard -- the perceived superstar point guard. Kind of like a quarterback. Carter-Williams is the man running the show, for better or for worse. A least for the next couple of weeks, then someone else will take over the prime position for Syracuse hoops, and the growing pains, i.e. frustration, will start all over -- for player and fans.