Hold The Gravy: Syracuse's Season Ain't Over Yet

Following Syracuse's win over Cal, a bunch of Orange fans started in on the whole "everything from here on out is gravy" thing. You can keep your gravy, I expect to win.

Share All sharing options for: Hold The Gravy: Syracuse's Season Ain't Over Yet

Within minutes of Syracuse's win over Cal that propelled them into the Sweet Sixteen, I saw a whole bunch of people board the gravy train... 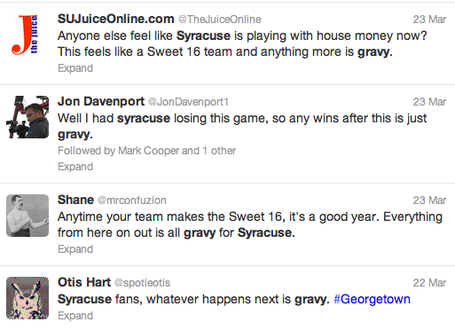 Gotta admit, that line of thinking always rubs me the wrong way. I know we get into this discussion every season around this time but I'll continue to say that the whole "everything else from here on out gravy" mantra is protective bulls**t.

You might as well say, "I know Syracuse is going to lose to Indiana so I'll just say we're already winners."

I also think the whole gravy boat ride comes from a perception that the team's expectations before the season are constant and remained the same throughout the year, which you and I both know is 100% nonsense.

If Syracuse loses on Thursday, there will come a time in the near future where we will be able to step back from the season and say, "they did good." But in the moments and days following the game, it sure won't feel like that. We'll still be mulling over the ways that SU could have won and should have won. And it certainly seems absurd to cut the Orange off at the knees today and say, "We know this is the best you can do."

So as far as I'm concerned, keep your gravy. I still believe this team can win and I expect them to win, opponent be damned. I'm not going to give myself a safety net in case they lose because I can guarantee you the players on the court wouldn't want me to.