CLUE-less: The NCAA Game of Intrigue, Innuendo, and Incompetence

ESPN's Mark Schwarz is apparently the victim of foul play and is found in one of the rooms inside The Melo Center. Who did it? And what NCAA infraction was used to commit the crime???

Share All sharing options for: CLUE-less: The NCAA Game of Intrigue, Innuendo, and Incompetence

Can't get enough of the constant speculation surrounding the integrity of the Syracuse men's basketball program? Bored with the same old accusations, and desperate to "spice things up"? Just bored???? Introducing "CLUE-less": The NCAA Game of Intrigue, Innuendo, and Incompetence! Grab some friends, dice, and a cooler full of those obscure beers that that Taco Time guy keeps yammering on about and solve the mysteries that Mark Emmert and his cronies can not!

Game Play directions follow the board game, and game cards... Let me know if anyone actually plays this thing! 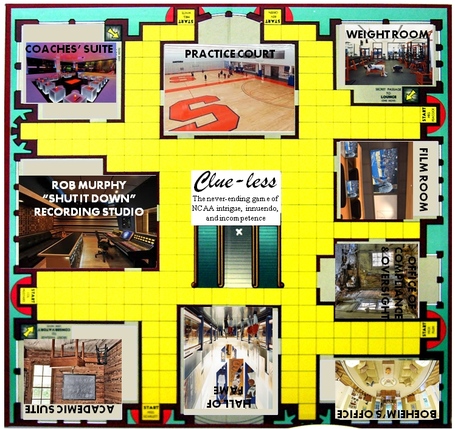 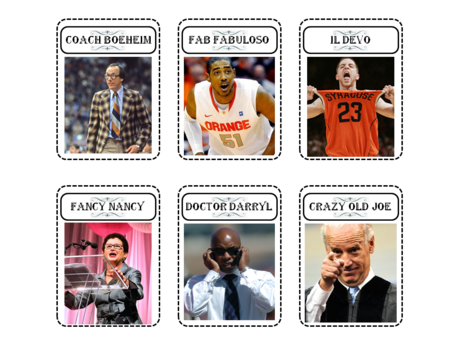 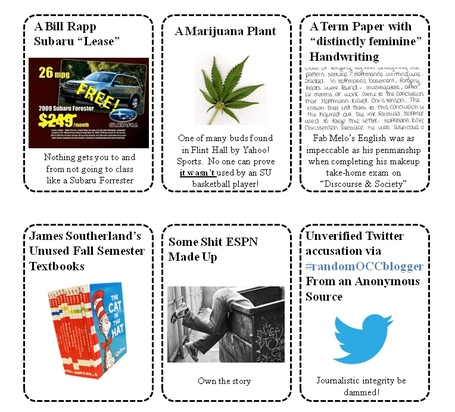 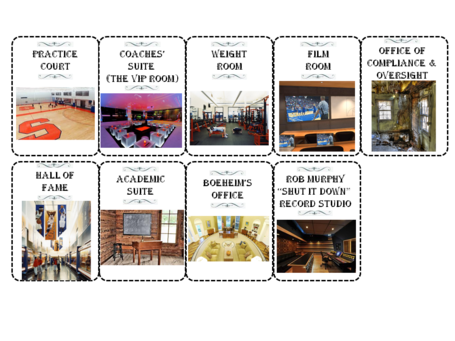 Rules for CLUE-less (From the TNIAAM Game Copyright 2013)

Mark Schwarz is apparently the victim of foul play and is found in one of the rooms inside the Melo Center.

The object of the game is to discover the answer to these three questions:   1st. Who? Which one of the several suspects did it?   2nd. Where?   3rd. and with What NCAA Infraction?

The answer lies in the little envelope resting on the stairway marked X in the center of the board. The envelope contains 3 cards. One card tells who did it- another   card reveals the room in which it all happened, and the third card discloses the infraction used.

The player who, by the process of deduction, good plain common sense, or an axe to grind first identifies the 3 solution cards hidden in the little envelope, wins the game.   This is accomplished by players moving into the rooms and making "suggestions" of what they believe is the room, the person and the infraction for the purpose of   gaining information. This information may reveal which cards are in other players' hands and which cards are missing and must, therefore, be hidden in the little   envelope.

"Accusing" a suspect and naming the infraction and the room under suspicion is one of the most exciting features of this game. Almost as exciting as watching a Georgetown v. Tennessee basketball game!

Equipment: The game Board showing nine rooms of The Melo Center.

1. Place the suspect tokens on the starting squares marked with their names. All 6 pieces are placed on the board regardless of the number of players.

2. Place each of the Infractions in a different room using any of the rooms.

3. Place the empty envelope marked "NCAA Investigation CONFIDENTIAL" on the spot marked "X" in the center of the board.

4. Sort the pack of cards into three groups- Room Cards, Infraction Cards and Suspect Cards. Shuffle each of these three groups separately. Take the top card from each group and place it in the envelope. This should be done carefully so that no player knows any of the three cards (one room, one infraction, and one suspect) placed in the envelope.

5. Shuffle together the three piles of remaining cards. Then deal them face down clockwise around the table. It is important that no player shall see any of the cards while they are being shuffled and dealt. (It doesn't matter if some players receive more cards than others.) Secretly look at your own cards: Because they're in your hand, they can't be in the Case File - which means that none of your cards was involved in the crime.

6. Take a detective's notebook sheet and, so that no one can see what you write, fold it in half. Check off the cards that are in your hand.

On each turn, try to reach a different room of the facility. To start your turn, move your token either by rolling the die or, if you're in a corner room, using a Secret Passage.

There are three ways of entering a room:   (1) Throwing the die and moving your token along the squares entering through a doorway,   (2) Via the Secret Passages by leaping across the board, corner to corner, without using the die, and   (3) a player's token may be placed in a room by another player in the feature play known as "The Suggestion." If the space at the entrance to a room is occupied   by the token of one player, no other player may move into that room, through that door.

Getting out of a room: There are three ways of leaving a room:   (1) by throwing the die and moving out through a doorway onto the squares, heading toward another room of your choice,   (2) by using the Secret Passages and finally,   (3) by being transferred to a new room by some other player.

On the throw of the die, you may enter a Room by the doors only, but you cannot leave a room on the same turn. Entering the Room ends your move. It is not   necessary to throw the exact number to enter a Room. That is, if you need 4 to get into a room and you have thrown a 6, ignore the last two units after entering   the Room.

Players already in a room may leave it by any door using the die as usual and moving toward another room or, they may use a secret passage, if in a corner room. The doors of each room are not counted as a square.

As soon as you enter a room, make a Suggestion. By making Suggestions, you try to determine - by process of elimination -- which three cards are in the confidential Case File envelope. To make a Suggestion, move a Suspect and a Infraction into the Room that you just entered. Then suggest that the crime was committed in that Room, by that Suspect, with that Infraction.

Remember two things:   1. You must be in the Room that you mention in your Suggestion.   2. Be sure to consider all tokens -- including spare Suspects and yourself! -- as falling under equal suspicion.

Proving the suggestion true or false:

As soon as you make a Suggestion, your opponents, in turn, try to prove it false. The first to try is the player to your immediate left. This player looks at his or her cards to see if one of the three cards you just named is there. If the player has one or more of these cards, he or she must show it to you and no one else. If the player has more than one of the cards named, he or she select just one to show you.

If that opponent does not have any of the three cards, then the next player at his left examines his cards and must show one of the three if he has it. Obviously, if any player has one or more of the 3 cards named in the Suggestion, it is proof that those particular cards are not in the envelope.

By making Suggestions and having them proved True or False players will eventually be able to identify the three cards in the envelope.

Tokens and weapons transferred to a room as the result of a Suggestion are not returned to their original positions on the board. There is no limit to the number of Suspect tokens or Infractions that may be in a Room at one time.

To leave a room in which your token has been placed by a Suggestion, either roll the die or, if you're in a corner room, you can use the Secret Passage.

Although there is no requirement or rule on how players should use the Detective Note Pads it is suggested that the best and easiest way to play the game is to   check off items on the Note Pads as they become known. Some players find it helpful to mark the initials of the player who showed the card.

In a Suggestion, the Room you name must be the Room where your token is located. But in an Accusation, you may name any Room. Winning the game: If the Accusation is completely correct, that is, if you find in the envelope, all 3 cards that you just named, lay the cards face up on the table and you are the winner.

If the Accusation is incorrect Secretly return the three cards to the envelope replace it on the board and accept a job offer from ESPN news as a field reporter.

You may make no further moves in the game.

You remain as a player to contradict Suggestions made by other players...otherwise known as Skip Bayless.

If your token is blocking a door, move it into Room so that other players may enter.

Your opponents may continue to move your token into the various Rooms where they make Suggestions.

Syracuse Under NCAA Investigation For 'Major and Wide-Ranging' Violations, Per Report