The first full day of the Big East Tournament is here. Post your comments and check back for updates, as the day progresses.

Update 2:18: Cincinnati beats Providence, 61-44. The performance by the Friars probably knocks them out of the NCAA Tournament.

In other news: A new Pope has been named. Of course, it comes after the Friars lose and Seton Hall gets ready to play Syracuse.

Walked by a priest (I assume Seton Hall's) in the press room and said "congratulations." He looked at me like I had two heads. #GetOnTwitter

Though, that's not why I am updating. Here's a picture sent by TNIAAM's Jeremy Ryan, who has situated himself at Madison Square Garden. Make sure you follow him @JeremyRyan44. 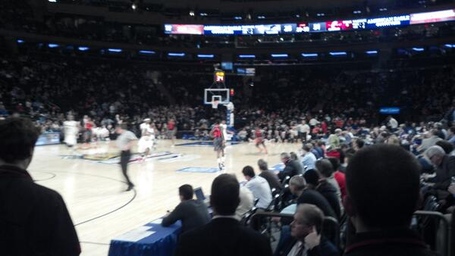 Update 12:32 p.m.: Cincinnati and Providence have reached the under-8 timeout of the first half, and the Bearcats lead 20-6.

Early on this is shaping into a slightly-better version of the Seton Hall-USF game on Tuesday night. (For now it is slightly better, of course, until, Cincinnati goes cold for the 3-point line and decides to keep shooting them.)

Intro: Sure, the No. 6-seeded Syracuse Orange play at approximately 2:30 p.m. ET against the Seton Hall Pirates at Madison Square Garden. (There will be a Game Thread for that.)

But, before that the No. 8 Providence Friars and No. 9 Cincinnati Bearcats play for their NCAA Tournament lives in Game 1 of Day 2 of the Big East Tournament (noon on ESPN).

After Syracuse and Seton Hall both struggle to score 50 points, the No. 7 Villanova Wildcats and No. 10 St. John's Red Storm face-off at 7 p.m. ET on ESPN2.

The day's action is capped off by No. 5 Notre Dame Fighting Irish playing No. 11 Rutgers Scarlet Knights at approximately 9:30 p.m. or so on ESPN2.

Though, these are not the top-notch match-ups every Big East fan is waiting for there should be some close games played at MSG. Lets just hope we have the least-watchable games out of the way and from here on out it will be nothing but great hoops that The Garden usually produces.

Anyway, comments and thoughts are welcomed below.

If anything notable happens (a silly GIF, a buzzer-beating finish a crazy post-game press conference) we will have the update here.